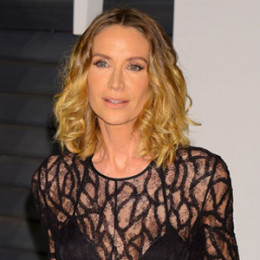 Kelly Lynch is an American actress and model and belongs to white ethnicity. She is married to Mitch Glazer. She has a daughter, Shane from her past affair.

An American actress, and model Kelly Lynch is well known for portraying her part in TV series including “The L Word”, “90210”, and currently, “Magic City”. She belongs to white ethnicity and holds an American nationality. She grew up in Golden Valley, Minnesota with her parents Barbara, a modern dancer, and a restaurateur, Robert Lynch.

The 58-years-old  Lynch studied at The Guthrie Theater. She worked as a flight attendant after graduating from College. In the 1980s, Kelly studied with acting instructor Sanford Meisner.

After a few small parts, Lynch landed her breakthrough role in the feature film “Cocktail” in 1988. In 1989, she featured opposite Patrick Swayze in the action film “Road House”. She won the Independent Spirit Award for Best Female Lead for her acting in the crime drama “Drugstore Cowboy”, directed by Gus Van Sant.

Kelly Lynch is married to producer, writer, and author Mitch Glazer since 1992. The couple has been married for more than 24 years, yet they don't have any children together, but Kelly has a daughter named Shane born in 1985 from her previous relationship. However, Kelly gave birth to her baby girl as a single mother. Her husband Mitch Glazer legally adopted Kelly’s daughter.

“She is a princess not because she has a prince, but because her father is a king.” • Happy Fathers Day Mitch Glazer! You beautiful wonderful incredible man! We adore you!

Even after all these years of their marriage, the couple seems very much in love with no sign of separation. Kelly has never mentioned about her ex-husband in social media, and it's still a mystery as who her former partner is.

Independent Spirit Award for Best Female Lead winner Kelly has an estimated net worth of $20 million. Most of her earnings come from her acting and modeling career.

Kelly and Mitch have been married for 24 years yet they don't have any children together. They still seem to be a lot in love even after all these years.

She has a daughter named Shane who was born on 1985 from her previous affair. She has not mentioned about her ex and has kept it a secret.

Kelly has a daughter named Shane who was born in 1985. She gave birth to her daughter as a single mum and now her current husband has adopted her.