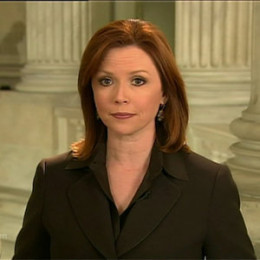 An American journalist, Kelly O'Donnell is known for her work on NBC Nightly News, Today, and MSNBC. She graduated from the School of Education and Social Policy. She used to serve as a reporter and anchor at WJW TV in Cleveland, Ohio, in the 1990s and at that time O'Donnell worked with former NBC reporter Martin Savidge. She has covered the Bush Administration, Congress and also covered both summer and winter Olympic games.

O'Donnell has reported a wide variety of events, such as the September 11 attacks, the space shuttle Columbia disaster, the Oklahoma City bombing, and the O.J. Simpson trial. She has received many honors, including Emmy awards, a National Headliner award, a New Hampshire Primary Award for Political Reporting, and Los Angeles Press Club awards. She is currently married to J. David Ake.

Kelly O'Donnell was born on 17th May 1965, in Cleveland, Ohio, the United States of America. She was born to an Irish immigrant family. Her parents are Kristien O’Donnell and Josh O’Donnell. She has one sibling, a younger sister.

Kelly O'Donnell is married to J. David Ake for a long time, albeit the exact date is not revealed. Her husband is an Assistant Chief of Bureau for Photos at The Associated Press in Washington.

Kelly manages to balance her professional responsibilities and personal life pretty well. Meanwhile, she has succeeded in keeping her personal life private and out of the spotlight. There are no reports on any of her past dating rumors and affairs.

The couple is married for over two decades but shares no children yet. Despite a low key relationship, it is assumed the couple is enjoying an amazing conjugal life.

Kelly O'Donnell has an estimated net worth of $8 million. Her source of income includes her salary and earnings from her career as a journalist. Kelly reportedly bought a luxurious house in Ohio in 2016.

Some reports suggest Kelly has earned over $201,000 annual salary as an NBC News Correspondent. Moreover, it's also reported that she made over $500,000 from her various works such as hosting, anchoring, show presenting and also the awards function anchoring.

She is currently married to J. David Ake. The couple seems to be very happy with each other so there are no signs of their divorce.