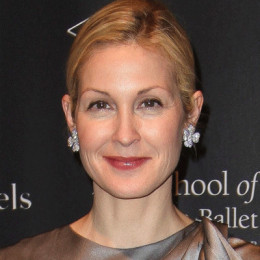 Kelly Rutherford is an American actress who is best recognized for her role in the NBC soap opera Generations as Stephanie Whitmore and in other soap opera like Melrose Place, Gossip Girl. Her mother is a model and a writer named Harriet (aka "Ann") Edwards. She has three siblings. She went to Corona del Mar High School. She started her career from the daytime soap operas and has been active in the industry since 1987.

She is currently dating screenwriter boyfriend Chiswell 'Chum' Langhorne for since September 2018. She shared a passionate kiss with her beau in New York City earlier on 28th February 2019.

The duo was strolling on the way with their dogs when they took a moment to pack on PDA.

She married her first husband Venezuelan banker Carlos Tarajano in June 2001. She filed for divorce after six months of marriage.

They had a long battle for child support and battle. She received temporary custody of her children in May 2015. Later, in December 2015, the children's father received full custody.

Rutherford has an estimated net worth of about $1 million as of 2019.

She filed for bankruptcy in June 2013 stating that she had debts of around $2 million. She spent more than $1.5 million on legal fees to the custody battle and divorce.

Reportedly, she spent $1.5 million in divorce and custody battle with her ex-husband.

Kelly Rutherford Deane was born on 6 November 1968 in Elizabethtown, Kentucky.

She is best known for her performance as Stephanie "Sam" Whitmore on the NBC daytime soap opera Generations.

He is a Venezuelan banker. He was diagnosed with a heart condition soon afterwards. They separated after 6 months of marriage and he died in 2004.

He is a German businessman. They have two children together. Their relationship was not good after few years of their marriage.

He was born a very healthy child. After his birth, his parents had some issues and disputes and his mother had filed for divorce.

While she was in the womb of her mother, her mother had filed for divorce against her father. There was the issue on their custody. Despite of the circumstances, she was born healthy.