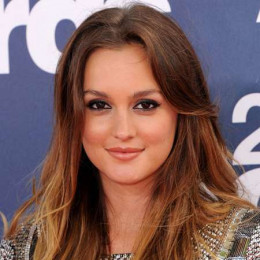 An American actress and singer who is famous for her role as Blair Waldorf in popular teen drama series "Gossip Girl". She is daughter to Constance and Douglas Meester. From very young age she was attracted in acting and as result she participated in productions at a local playhouse when she was still young. She completed schooling from Professional Children's School. In 1999 she debuted in big screen playing the role of Alyssa Turner in Law & order. In 2005 she was casted in the role of Savannah Bennet in series Surface. She has made guest appearance in series like Numb3rs, House M.D. and CSI: Miami. Beside acting she has also released her debut single "Somebody to Love" with Universal Republic.

In 2008 she was listed in 100 Most Beautiful People along with the cast of Gossip Girl People magazine's so there is no wonder many guy has dreamed her to be their dream-girl. She has dated her co-star from Gossip Girl. They kind of briefly dated each other and broke up. Currently she is married with former O.C actor. their marriage was held in private ceremony. They are already parents of one beautiful daughter.

They first met each other on the set of The Oranges. At the beginning they secretly dated each other and in November 2013 they got engaged and got married a year later. They have on beautiful daughter.

She is very gorgeous. She is the only daughter of the family. Her picture along with her mother can be found in different sites