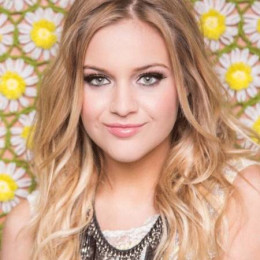 Kelsea Nicole Ballerini is an American country music artist, best known for her single "Love Me Like You Mean It", which was listed in Top 30 of U.S. Country Chart. In 2014, she was named one of Country Music Television's "Next Women of Country". By the age of 19, she had signed a contract with Black River Entertainment. Her father was a country radio programmer and her mother was a marketing executive at Bible publishing company. Ballerini is married to Morgan Evans in December 2017 and shared a healthy relationship. Her husband is also country singer. She has no affair and linkup rumors in past.

Kelsea Ballerini was born Kelsea Nicole Ballerini on September 12, 1993, in  Mascot, Tennessee, U.S. Nationality-wise, she is American and belongs to White-American ethnicity.

Ballerini was raised in Knoxville, Tennessee. His mother has worked in Thomas Nelson Bible Publishing and father is a former sales manager for country radio stations.

Ballerini learned to dance at the age of 3 but she stopped dancing after 10 years. She used to sing at church and school choirs during her early days. At 12, Ballerini wrote her first song for her mother and later moved to Nashville, Tennessee.

Kelsea Ballerini started her professional musical career in 2012 when she signed a deal with Black River Entertainment. She released her first single,  "Love Me Like You Mean It" in late 2014. The same year, she named one of CMT's Next Women of Country.

In February 2015, Ballerini debuted at the Grand Ole Opry and after five months her single, Love Me Like You Mean It reached at number one on the Billboard Country Airplay chart. She became the first female country music artist to reach number 1.

Later, she launched her other single too such as, "Dibs", "Peter Pan", "Yeah Boy". In 2017, Ballerini received two Country Music Award nominations. The same year, Ballerini released her first single, Legends from her second studio album.

They first met at CMC Awards and started dating in March 2016 and got engaged in Christmas of that year. Currently, the pair resides in Nashville and living a prosperous married life.

In December 2017, Morgan Evans wrote a song for her named I Do which peaked #16 on the ARIA Digital Tracks, #8 on the Australian Artist Singles and #4 on the Hitseekers Singles charts.

Kelsea Ballerini has an estimated net worth of $6 million which she accumulated from her singing career.

In February 2017, Ballerini brought a house in Nashville which costs around $585,000. The house is located at 2,403 square feet area consisting 4 bedrooms and 2.5 bathrooms.

Morgan Evans is an Australian Country music singer and songwriter. He released his debut Ep, Big Skies in September 2007.