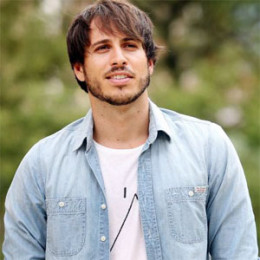 Morgan Evans is an Australian country music singer and songwriter who has entertained the listeners with his amazing music. Debuted his career with the trio, Extortion, he won a state high school band competition called Youthrock in 2002. Signing with Sony BMG, he released his debut EP, Big Skies in September 2007.

Morgan Evans was born Morgan John Evans on April 24, 1985, in Newcastle, New South Wales, Australia. He is Australian and belongs to the White ethnicity. His birth sign is Taurus.

Evans was raised along with his younger brother, Tom Evans who is also a musician playing bass guitar. He performed his first gig at the age of 13.

In 2006, the band changed their name to Solver, where Evans provided lead vocal and guitar, Tom was on bass, and a friend, Nicholas Cook performed as the drummer. The following year, the band won the  Artist of the Year and Best Rock Act at the MusicOZ Awards in 2006.

Morgan Evans began his professional music career since 2007. He won the Road to Tamworth competition and flew to Nashville to record a single. He was signed to Sony BMG and released his debut EP, Big Skies in September 2007.

Evans supported popular artists like Taylor Swift and Thirsty Merc on their Australian tours. In 2013, Evans was honored CMC Music Awards for New Oz Artist of the Year. He released his self-titled debut studio album in March 2014. The album received positive feedback from audiences and critics. The album peaked at #20 on the ARIA Albums Chart.

In 2016, Evans was named as Country Music Association Global Artist of the Year. Besides, he won five fans voted Awards, including Male Artist of the Year. The following year, he signed a contract with Warner Music Nashville and released his debut US single, Kiss Somebody.

The couple started dating in March 2016. They first met at CMC Awards held in Australia. They co-hosted the event together. They were engaged on Christmas of that year. Evans proposed Ballerini with a diamond ring.

Currently, the couple resides with his wife in Nashville and enjoying their blissful married life. The pair exchanged David Yurman's rings that have customized messages engraved.

On December 8, 2017, Evans released a single, I Do. He explained that the song is about his girlfriend, recorded it about his fiancée, releasing it about his wife. The song peaked #16 on the ARIA Digital Tracks, #8 on the Australian Artist Singles and #4 on the Hitseekers Singles charts.

The track also described, how he fell in love, what he loves about his wife Kelsea Ballerini, and his hope for their lifelong union.

Evans is active on Instagram as well and has shared many pictures about his musical journey. He also shared some pictures with his wife.

Morgan Evans is one of the popular Australian country singers of the present time. He hasn't disclosed the exact figure of net worth.

In February 2017, his wife bought a house in Nashville worth $585,000. The house covers the area of 2,403 square feet and consists 4 bedrooms and 2.5 bathrooms. His wife, Kelsea Ballerini has an estimated net worth is $6 million.