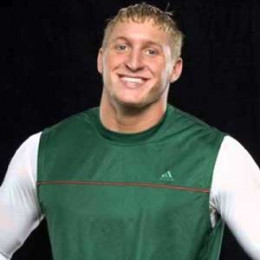 Kenneth George Doane Jr. famously known by his wrestling name Kenny Dykstra made his wrestling debut at the age of fifteen in 2001. Doane was part of The Spirit Squad faction, professional wrestling Tag Team. The squad won the World Tag Team Championship after three months of their debut in Raw. Doane also appeared on a Fox Reality series named Seducing Cindy.Besides that, he also published his first children's book entitled Billy's Bully.

Kenny Dykstra, is an American professional wrestler born on March 16, 1986, in Southbridge, Massachusetts, the United States to father Ken and mother Vickie Doane. He was raised along with his older brother Mike.

Kenny debuted in professional wrestling at the age of 15 in 2001, in New England area under the name Kenn Phoenix. Later, he was trained by professional wrestler and trainer Killer Kowalski in Malden, Massachusetts. He was contacted by World Wrestling Entertainment (WWE) and was asked to make appearances for their developmental territory Ohio Valley Wrestling (OVW). On May 12, 2003, he made his first national television appearance in WWE at the age of 17 in the episode of WWE Raw as Ken Pheonix.

He made another appearance on an episode of Sunday Night Heat, losing to Lance Storm before officially signing to a developmental deal and to OVW full-time on June 4, 2004. On June 3, 2005, at the promotion, his first match was against Kenzo Suzuki, whom he defeated. On June 25, 2005, he won the Television Championship from Deuce Shade. He had favorable title defenses but lost the title to CM Punk on November 9, 2005.

Besides WWE, Kenny also appeared on Seducing Cindy, a Fox Reality series that follows Cindy Margolis, who was once the most downloaded woman on the Internet, as she searches for the new love. Kenny made it to the final five but later was eliminated.

In 2013, while recovering from knee injury, He wrote his first children's book titled Billy's Bully, which was published in June 2013.

Kenny Dykstra was engaged to fellow professional wrestler Mickie James in 2007. However, their relationship could not last as Kenny found about James's Affair with John Cena.

As of 2017, Kenny Dykstra's net worth is under review, but we can assume that he earned a good sum of money from his professional wrestling career.