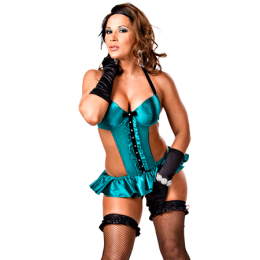 An American professional wrestler, model, actress and country singer who is wrestler for Total Nonstop Action Wrestling (TNA). She is daughter to Stuart James and Sandra Knuckles. Her parents got divorced while she was still young. In 1997 she graduated from Patrick Henry High School. She was an avid fan of professional wrestling from very early age and as a result of which she attended a professional wrestling school located in the Washington, D.C. In 1999, she started her professional career as a valet on the independent circuit. She is also only women to be in Clockwork Orange House of Fun matches till now. In 2005 she also appeared in World Wrestling Entertainment or WWE where she won won her first WWE Women's Championship at WrestleMania 22. In 2010, she left WWE and after wining TNA Knockouts Championship three times she left the TNA in 2013. She was voted Woman of the Year twice in 2009 and 2011.

Talking about her relationship status, she has not married yet. Recently, she was engaged with her boyfriend who is also a professional wrestler. Together the couple is blessed with one baby boy. Prior of being in relationship with him, she has dated no. of handsome hunks and most of them were wrestlers and body builders. According to her, after she is done with wrestling career she want to own a farm and be an equine trainer.

He is the only son of her from her relationship with Nick.