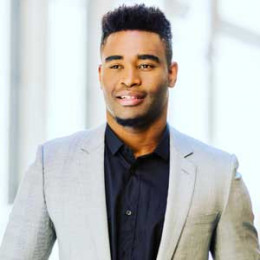 The South African dancer, Keo Motsepe is famous for his dancing styles, Latin and Ballroom. He became the first African to join the Burn the Floor World Tour and ABC's show, Dancing with the Stars. He is more concerned about his career and is moving ahead to success and prosperity. Keo is dating his girlfriend Emma Slater, an English professional dancer since 2015

Keo was born on 24th November 1989 in Pretoria, South Africa. Motsepe is of black ethnicity. He grew up along with his two sisters nearby Johannesburg to father, a businessman, and mother, a doctor. At the age of 10, his parents separated.

When he was 5, one of his friends took him to a small dance studio which deepened his passion in dancing. Motsepe was also motivated from his maternal uncle as he runs a dance studio.  No such information about his education is revealed.

From the age of 11, he started learning dance from the dance studio of his maternal uncle. He mostly focused on dancing rather than his studies so at the very early age he became a contestant of International Dancing Competition representing his country.

Later in 2012, Keo was part of Burn The Floor which made it easy for him to participate in the 19th season of Dancing with the Stars where he was paired with the Olympic athlete, Lolo Jones. But unfortunately, they were eliminated in the very first segment. Latterly, in season 20 he was paired up with Charlotte McKinney(model), Chaka Khan, singer in season 21 and Jodie Sweetin, actress in season 24. Furthermore, in 2013 he debuted on TV performing on Strictly Come Dancing South Africa.

Mostly, Keo is linked up with his partners in the show. These all are rumors about him and is not the truth. He is seriously in love with his girlfriend Emma Slater, an English dancer, and choreographer since 2015.  Motsepe is still unmarried. Keo has given priority to his career.

Keo Motsepe is not limited to dancing but also worked in several ads too. His salary is about $300 thousand and has an estimated net worth of $ 2 million. His source of income is his dancing career. His favorite car manufacturer is Aston Martin.