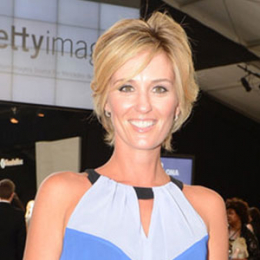 Kerstin Lindquist is a famous American tv host better known for working in the QVC television program. She is also recognized as an actress for working in movies like 100 Girls and That's My Bush. The QVC host is also popular as a writer and published a book named 5 Months Apart.

Personal life of Kerstin Lindquist; Know about her Married Life

Kerstin Lindquist is currently married to Dan. She and her husband share a good bond as they are in a marital relationship for over a decade. Moreover, they recently celebrated their sixteen years wedding anniversary on March 30.

Famous QVC host Kerstin Lindquist and her spouse Dan during their vacation in Italy.

The couple dated for several years and finally took a big step and shared the wedding vows on March 30 of 2003. They tied the knot in a private ceremony among their close friends and family. Lindquist and her spouse, Dan just celebrated their nineteenth wedding anniversary on 30 March 2022-. They are united as life partners for seventeen years and a month today.

Kerstin, on April 20, 2020, took a full 12 min workout video of herself doing salsa with Dan within the premises of their house. She captioned:

"Hubby was such a good sport to do a fitness video with me for husband appreciation day. I fell in love with this guy the first time I saw him dancing. I was a dane and yoga instructor at the time".

Similarly, Kerstin addressed, that this quarantine has turned her into a 44-year-old who began @_tic_toc_ to reward her daughter for school work and now it does unknowingly in the corner and gets unexplainable satisfaction out of mastering silly moves.

Lindquist and her family are spending quality time at home entertaining each other in this coronavirus lockdown. Also, she and her daughters are doing early workouts to maintain their bodies.

The pair is the proud parents of their three children, one son, and two daughters. Besides, the duo adopted their first daughter, Grace and eventually after that Kerstin gave birth to her second daughter, Georgia through In vitro fertilization in 2009. And after a couple of years, they gave birth to their only son after facing several miscarriages.

As of now, Lindquist is out of any rumors and controversies and is spending her life with the love of her life and her children. Further, she loves to go on vacations with her family and often shares pictures on her social media accounts.

What is the Net Worth of Kerstin Lindquist?

Kerstin Lindquist holds an estimated net worth of $900,000, she grabbed that fortune by working as a television program host. In addition, the average salary of a television host is $51,320 annually. Similar to American tv hosts Kate Connelly and Lauren Bohlander.

Recap: overnight flight sounds good but none of the big 3 slept at the same time & we’re all tired & cranky! Powered through and took our good catholic girls to the Vatican. Think I’m loosing my big toenails from walking all day under Bens 30 lbs but worth it because I’m eating ALL the pizza & gelato I see. Got recognized 5 min after touching down in Rome & I’m pretty sure i was yelling at a kid & I smelled. . Exhausted, hungry, but so so so happy. These are the real life memories I’ve always wanted. #partyoffive #5monthsapart @sandeverywherefamily

Kerstin is currently working as a QVC program host in several programs of the network and also writes blogs on its webpage. She first joined the network in September of 2011. Further, she also worked in several TV shows named The West Wing and Real Housewives of Beverly Hills.

The QVC host also tried her hands at writing and published a book named '5 Months Apart' in 2017. The book describes the story of her two daughters who were conceived in the same month but how were born five months apart.

Kerstin Lindquist is currently married to Dan. She and her husband share a good bond as they are in a marital relationship from over a decade. Moreover, they recently celebrated their sixteen years wedding anniversary on March 30.

The pair is the proud parents of their three children, one son, and two daughters. Besides, the duo adopted their first daughter, Grace.

The pair is the proud parents of their three children, one son, and two daughters. Besides, the duo's second daughter, Georgia was born through vitro fertilization.