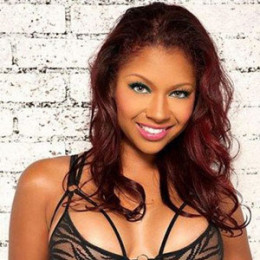 Kia Proctor is a former stripper and current model from America. Her name grabbed the attention of the media when she started dating her footballer boyfriend Cam Newton.

Kia Proctor was born Shakia Proctor on October 16, 1988.  She was born to Jerome Proctor and Anne Marie Proctor in Maryland-Virginia area.

Kia started working as a stripper under her stage name Hazel. She worked in a popular strip club Washington DC Stadium. Later on, she joined a party hosting career in Atlanta.

Afterward, she left the stripping business and hosting job and went on to be a model.

The 29-year-old dancer Proctor is in a romantic relationship with her boyfriend Cam Newton. Cam is a quarterback player of the Caroline Panthers. The duo made their public appearance at Kentucky Derby in 2013 and at 2014 NFL Honors.

Though they are not married the couple is parents to a son named Chosen Sebastian Newton on Christmas Eve 2015.

"I've been quiet about this because I didn't want to create a distraction for my team and appreciate the privacy in this joyous time."

On 3 February 2017, they had their second child a baby girl named Sovreign-Dior Cambella.

She also has a daughter from her previous relationship. The father of her eldest daughter is still unknown. She never revealed anything about her past relationship.

The net worth of the beautiful Kia is not disclosed. Looking at her lavish lifestyle she probably earns a decent salary.

Chosen Sebastian Newton is the first child of Kia Proctor with her boyfriend Cam Newton. He was born on December 24, 2015, in Christmas Eve.