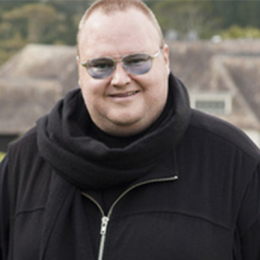 German-Finnish Internet entrepreneur as well as a musician, and political party founder, Kim Dotcom is best known as the founder of 'Megaupload'.His main source of income is a company named 'Kimvestor', valued at 200 million euros. According to U.S. officials, he owned 18 luxury cars include pink 1959 Cadillac and three cars with vanity license plates that read HACKER, MAFIA, and STONED.

Kim Dotcom married Mona Verga, director of the Dotcom family's companies.The couple married on 10th July 2009 but on 17th May 2014, he announced on Twitter that he was separated and filing for divorce.The couple has five children including Keera Dotcom, Kylee Dotcom, Kimmo Dotcom, Kobi Dotcom, Kaylo Dotcom.In 2005, Dotcom changed 'Data Protect' to 'Megaupload', also started a file-hosting website, which made his millions.

She is a first child of this couple.

Mona Verga is a second daughter of this couple.

He is the first son of this couple.

He is the fourth child of this couple.

He is a fifth child of the couple.