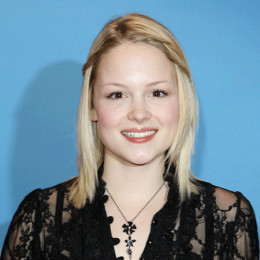 Kimberley Nixon is known for her role in the BBC One period drama Cranford, as Sophy Hutton and in the BBC Two comedy Hebburn, as Sarah Pearson. She makes a good net worth from her career.

Kimberley Nixon is neither married nor dating anyone as of now. She was once rumored of dating actor Rupert Grint, but they never spoke publicly about it. Grint is an actor who is currently in a relationship with actress Georgia Groome.

Kimberley Nixon has the net worth of $1 million.

Kimberley Nixon was born on 24th September 1985 in Bristol, England. Her birth sign is Libra. She is a gorgeous actress, born to Welsh parents. She has six brothers.

Nixon moreover was trained at the Royal Welsh College of Music and Drama in Cardiff. As of 2010 Nylon Magazine's Young Hollywood Issue, she was regarded as one of the fifty-five faces of the future.