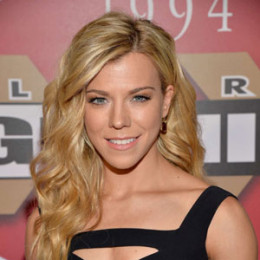 Kimberly Marie Perry better known as Kimberly Perry is an American singer. She is a lead singer and guitarist of The Band Perry, an American music group owned by Reid Perry, Neil Perry including her. Some of her popular song includes If I Die Young and All Your Life which was nominated for Grammy Awards. She along with the band has received different awards and nominations including Academy of Country Music Awards, Billboard Music Awards, CMT Music Awards, Teen Choice Awards and so on. Currently, she is in a marital relationship with J.P. Arencibia though she is equally focusing on her musical career.

Kimberly Perry was born in Jackson, Mississippi, United State on 12th July 1983, to parents Marie Perry and Charles Stephen Perry. Her parents are a member of a band and were an inspiration to her. She is the sibling of Reid Perry and Neil Perry and is the elder one among them. She belongs to white ethnicity.

From childhood, she was passionate about singing and started singing in her own band with her brothers. In 2005, the siblings formed the band, The Band Perry and joined a New Faces of Country tour. Later, in 2008, they were discovered by Garth Brooks’ manager Bob Doyle and helped them to make a record. The band signed to Republic Nashville in 2009.

The Band Perry released their first album, The Band Perry in 2010. From the album, If I Die Young reached No. 1 on the country music chart and No. 14 on the Billboard Hot 100. The album includes some of the hit songs All Your Life and You Lie.

In 2012, she along with her band began working with producer Rick Rubin on their second album, Pioneer. Their second album released in 2012 where they have recorded over 12 songs. Their first single was Better Dig Two. Their second single was Done which reached number 8 on the Hot Country chart and reached No. 1 on the Country Airplay chart in August 2013. Pioneer ended up being produced by Dann Huff and become the group’s first number one on the Top Country Albums chart.

Apart from recording the album, the band has done several tours to support their album. They made their first headlining tour called We Are Pioneers World Tour to support their second album, Pioneer which began from Gothenburg, Sweden and ended in Primm, Nevada and has supported for All the Woman I AM Tour, Virtual Reality Tour, Live & Loud Tour and Ten Times Crazier Tour as well.

Also, she has performed along with her band The Band Perry in the pre-game show of Super Blow XLVII on 2nd February 2014. They were praised by audiences after offering to cover the burial expenses for the funerals of a mother and her eight children who were killed in an accidental house fire in the Greenville, Kentucky area.

Moreover, they announced their third album, My Bad Imagination and currently they are working on the album, on 2nd February 2017.

Talking about Kimberly Perry’s personal life, she is in a happily married life with husband J.P Arencibia, for the last three years.

The couple first met in February 2012 and their love story has been really wonderful. The couple engaged on 30th September 2013 and married in July 2014. The wedding ceremony was held in Greenville, Tennessee. There was a presence of close friends and family members.

It is also said that Arencibia proposed her with 3.3-carat ring after the event in a reception held at Perry’s parents’ home. She actively participates in social sites like Instagram and has shared her beautiful moment with her husband through it.

Kimberly has received huge popularity in a very short period of time and has got a bright future as well. She not only received popularity but also has earned a good amount from her career in singing. She has an estimated net worth of $2.4 million.