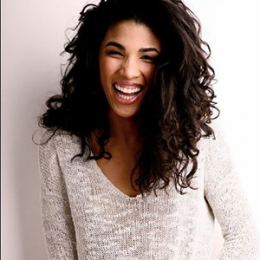 Former Model, Kristen Corley is best known as the wife of popular musician, Chance the Rapper. She is in the limelight since she started dating the rapper and their on-off relationship often made headlines in the media.

Kirsten Corley is happily married to her longtime boyfriend, Chance the Rapper who is a musician by profession. The duo exchanged a vow on March 9, 2019, at the luxurious Resort at Pelican Hill in Newport Beach, California. The bride chooses white Galia Lahav strapless gown and groom wore a dashing white tuxedo with a black bow. Further, the wedding held among 150 guests. 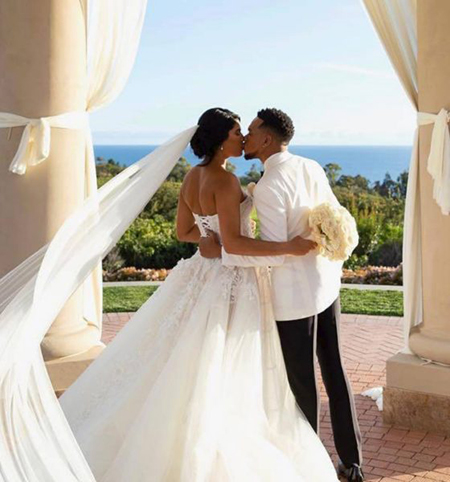 Kirsten Corley and Chance the Rapper at their big day in 2019.
SOURCE: the king of reads.com

But it isn't happy all the time, the couple faces many highs and lows in their six years of a long relationship. The duo knew one another since their early days and started dating in 2013,  following the release of his mixtape ‘Acid Rap’.

After two years of dating, the couple welcomed their daughter, Kensli. The couple, however as a protective parent decided not to made public their baby girl in social media until late December 2016.

Marriage is dope cause I get to live with a mama forever. Not my mama, but it damn near feels like it sometimes. Thank you bringing Kensli into this world but also for occasionally being a mommy to me 🤒🤕😴🥰🥰

Soon, the couple started facing complications in their love life and got temporarily separated. Corley, even went to court seeking child support from her partner, however, the case was eventually concluded out of court in March 2017. Fortunately, the couple has since gotten back together and engaged in July 2018. As of 2019, the pair is expecting their second child.

Kirsten Corley's Net Worth and Salary

Kirsten Corley is a former model who worked with several reputed brands in the past. The average salary of the model is $42,180 and she might also earn the same figure. Considering her career graph, Corley net worth is somewhere $200 thousand-$500 thousand.

On the other hand, her husband is one of the popular musicians who hold an impressive net worth of $25 million from his career. Moreover, he made $32 million in between 2016-2018 from his various endeavors.

The husband and wife duo sold their 4,500-square-foot condo located in Streeterville neighborhood at $4 million in 2018.

Kirsten Corley was born on May 31, 1993, in Chicago, Illinois, the US under the birth sign of Gemini. She holds American nationality and belongs to Hipsian ethnicity/race.

This was taken the day I met my wife. Link in bio.

Corley started her career as a model and has done several modeling works. In 2014, she was a part of the editorial shoot where she wore an oversized boxy maroon bomber jacket with a white t-shirt and from Alexander Wang’s Autumn/Winter collection.

Marriage with Chance The Rapper

Chance The Rapper is a popular American musician. The duo tied the knot in March 2019 at a lavishing ceremony.

Kensli Bennett was born in 2015. She is the first daughter of Kirsten Corley and Chance the Rapper.