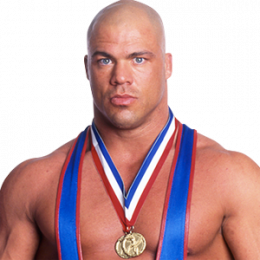 Kurt Angle is an American professional wrestler, actor and retired amateur wrestler. He started amateur wrestling at the age of seven. Angle had won a gold medal in freestyle wrestling at the 1995 World Wrestling championships, and 1996 Summer Olympics. Kurt is one of the four people to complete an amateur wrestling Grand Slam (junior nationals, NCAA, World Championships, Olympics) and the only professional wrestler in the history to have won the WWE, Heavyweight, WCW, TNA and IWGP world championship. He made his acting debut in 2008 as a racist prison in the short film "Chains." Angle graduated with the degree in education. He has four older brothers and a sister who died in 2003. His father was a crane operator, who died when he was 16 and his mother recently passed away after a long battle with cancer.

Angle married Karen Smedley on December 19, 1998. But this couple couldn’t stay together for long and was reported that Karen filed for divorce in September 2008. They have two children together, a daughter named Kyra Angle and son Kody Angle. In 2010, it was reported that Angle was engaged to actress Giovanna Yannotti. They had their first child, daughter Giuliana Marie Angle in 2011. They got married after their daughter was born, in 2011. This couple became parents to their second child, daughter Sophia Laine Angle in 2012. Their third daughter Nikoletta Sky Angle was born in 2016.

Kurt Steven Angle was born on December 9. 1968 to Jackie and David Angle. He was raised in  Pittsburgh suburb of Mt. Lebanon Township, Pennsylvania along with his four siblings. His elder brother, Eric is also a wrestler like him, Kurt lost his sister, Le'Anne in 2003.

His father died, when he was just 16 because of a construction accident and he dedicates his career and autobiography both to his late father.

Kurt began his wrestling career at the age of seven. He joined Mt. Lebanon High School and won varsity letters in football and wrestling. After completing his higher studies, he attended the Clarion University of Pennsylvania and gained his graduate degree in education in 1993.

In 1996, he succeeds to win a gold medal at the FILA Wrestling World Championships in Atlanta, Georgia.

After winning the gold medal his professional wrestling career has got a new path. In 1996 he gave an in-ring interview and provides guest commentary. Kurt competed at the National Wrestling Alliance's which was held on October 24, 1998.

He has an amazing WWE career and known as a professional wrestler for the World Wrestling Federation. Even he appeared in movies too, such as;  Sharknado 2: The Second One, Warrior, River of Darkness, The Last Witch Hunter and much more. Later he  Angel got into a public spat with Randy Orton in 2011 when he accused him of stealing his wrestling moves.

Prior marrying to Giovanna he was previously in a marital relationship with Karen Smedley. The duo married on December 19, 1998, and blessed with two children; daughter, Kyra Angle (born December 2, 2002) and son, Kody Angle (born October 26, 2006).

Kurt Angle is considered as one of the highest paid wrestlers, he has earned a very impressive net worth from his acting and wrestling career of $25 million. He is living a lavishing life along with his wife and children.

Kurt Angle has two children with his former spouse Karen Jarrett, daughter Kyra Angle and son Kody Angle. Karen filed for divorce in the mid-2008 and was finalized in October 2008. It was reported that Karen was with TNA co-founder Jeff Jarrett while Kurt and Karen separated in 2010. Karen and Jeff married on August 21, 2010. Karen has three stepdaughters as a result of her marriage to Jarrett.