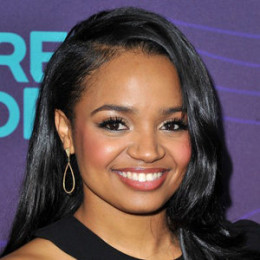 A prominent actress, Kyla Pratt is well known for her role Maya Dolittle, Eddie Murphy's daughter on the film Dr. Dolittle and its sequel Dr Dolittle 2. Pratt began acting at age 8, appearing in commercials for an interactive computer game and Nike. She also has notable vocal ability as a singer and covered The Lion King movie song "Circle Of Life" originally by Elton John. She was born to school teacher Kecia Pratt-Mccullar and a professional basketball player Johnny Mccullar.

She is currently romantically involved with Danny Kirkpatrick - a hip hop and tattoo artist as well as a songwriter. She has been dating him since the year 2005 and together they have parented two children. It is due to their pure love and dedication to each other that the couple are in no hurry to get married. As his boyfriend is supporting in nature, so she has become able to carryout her family and her professional life together.

It was a great suprise for her fans when her daughter Lyric Kai Kirkpatrick was born in November 17, 2010.

Her second daughter was born in August 5, 2013 whose name is Liyah Kickpatrick.