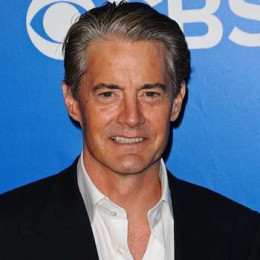 Kyle Merritt MacLachlan is an actor, best known for portraying in Blue Velvet as Jeffrey Beaumont and in the science fiction action film The Hidden, as Lloyd Gallagher. He is widely acclaimed for playing the role of Special Agent Dale Cooper in Twin Peaks, which earned him two Emmy Awards Nominations and took home a Golden Globe Award for Best Actor in Television Drama Series. He is the proud son of Catherine, a public relations director and Kent Alan MacLachlan, a lawyer and stockbroker.

Moving on to his personal life, he is a happily married man. He has been enjoying his marital relationship since 2002 and with his wife he has raised a son. The couple seems to have a good chemistry with one another so there is a rare chance of their divorce. The family currently lives in Manhattan. Before marrying his wife, he had dated few gorgeous ladies.

She is the first wife of Kyle, whom he married in the year 2002. She is a film producer by profession.

He is the only child of Kyle who was born on July 26, 2008. When Callum was born, his father created a new wine vintage at his winery called "Baby Bear".