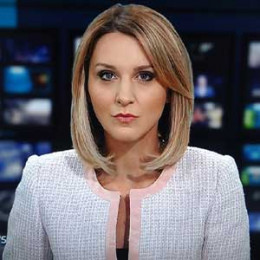 Kylie Pentelow is a very beautiful and talented English journalist and widely famous as television news presenter. She currently works for a big network such as ITV & British Broadcasting Network (BBC). She is also famous for her work in ITV Weekend News & ITV News London. She currently resides in South West England, United Kingdom.

She is a British citizen and belongs to white ethnicity. Kylie lived with her parents, two brothers and a sister. Her father, David Pentelow died of skin cancer, so she became a patron of national skin cancer awareness charity and presented a series on ITV which focused on people's final stages of cancer treatment.

Pentelow studied at Sir Christopher Hatton School in Wellingborough and graduated from “University of Sheffield” with an M.A. in journalism.

Pentelow made her career debut as a reporter for the Bath Chronicle and joined BBC West Point as a video journalist. After joining the BBC graduate training scheme, Kylie began postings on BBC local radio in Oxford and Birmingham, Bristol. She then became a reporter and presenter for BBC East Midlands Today.

Kylie transferred to ITV and became the news correspondent for the ITV Breakfast program Daybreak.

Later in July 2013, she worked as a presenter for ITV News West Country where she currently, co-anchors the 6 pm regional news alongside Ian Axton.

Kylie carefully managed her professional and personal life in a balanced way. Her unique style of anchoring and a great sense of humor has made her a favorite media personality.

Pentelow is 37 years old is possibly single. Despite her popularity, she has maintained a low profile. Nothing about her married life, love affairs or boyfriend has been revealed in the media.

In addition to her career as a journalist, she is an excellent interior designer and has redecorated numerous properties over the years.

Looking at Kylie's successful career, she must probably earn a good amount of money as salary. She is an owner of a vintage 1970 Carlight caravan, on which she created a self-produced Youtube-chronicled restoration series.

In 2017, her current estimated net worth is around $25 million dollar