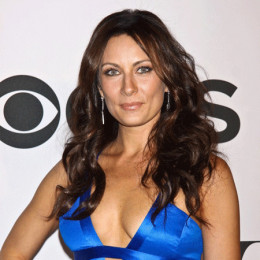 An American gorgeous stage and screen actress who is better known for playing the role of Maria Grazie on the TV drama Law & Order: Special Victims Unit with Mariska Hargitay. She is daughter to Martin Vidnovic, a Broadway actor and Linda Wonneberger, a former actress and singer. When she was just a child her parents got divorced. From her young age she had interest in musical theater When she turned 16 she starred in her high school production of Hello, Dolly! for which she was awarded with Paper Mill Playhouse Rising Star Award. In 1997 she completed her graduation from Kinnelon High School. In 1998 she started her professional career by playing role of Liesl in a Broadway of The Sound of Music. In 2000 she was nominated for Broadway's Tony Award as Best Actress for "Swing!" and again in 2002 for her role in "Into the Woods." Currently in 2015 she is working in the CBS series Supergirl.

Talking about her personal life recently, she was engaged to her boyfriend who initiated a one-knee proposal while they were touring their newly bought NYC apartment. Previously,she had two long-term relationships. Firstly, she was married to a singer and later to an actor. Unfortunately both of the marriage ended in divorce. She has not been a biological mother yet may be that's because she is busy in her career.

Professionally he is a lead singer of The Spin Doctors. Their marriage relationship didn't last more than a year.

He is an actor. they first met each other at World AIDS Day "dream cast" concert of The Secret Garden. Reason behind their divorce is still unknown.