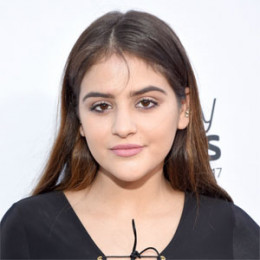 Born and raised in Miami, Florida, Lauren Giraldo is a famous American singer, actress, producer, and also an advocate. She's gained huge fame in social media and has more than 2.5 million followers on Vine. Known for her impromptu one-take vine videos Giraldo prefers to maintain a low-key personal life. Currently, she resides in California and rising as one of the famous social media personalities.

Lauren Giraldo was born on 11th of January 1998 in Miami, Florida. She is American and belongs to the mixed ethnicity of Colombian and Spanish. Lauren Giraldo is originally from Miami, Florida and her mother works at a children's hospital. She has a sister named Kristina Giraldo, who is also a popular Vine media star.

Giraldo had a keen interest in singing and acting since she was a child and hence studied musical theater.

Lauren Giraldo moved to Los Angeles at the age of 17 in order to pursue her career in entertainment industry. In 2013, she joined Vine and her charm succeeded to impress millions. With her spontaneous yet funny vine videos, she managed to amass more than 2.5 million subscribers, within a year.

Giraldo started her self-titled YouTube channel, Lauren Giraldo on August 14, 2013. She uploads a number of challenge videos and makeup tutorial videos on her channel.

Giraldo hosts "Lady Bits with Lauren Giraldo” for the famous entertainment company Fullscreen Network. She also serves as the executive producer of Latina docu-series which is under post-production with Covert Media. The show has started casting in Miami since 2016. The show aims to approach the series on cable TV network as well. In an interview with Variety, she stated how she was happy to work with the good team. She explained,

“I couldn’t think of a better team to work with on a project that hits so close to home,"

Giraldo, who's also passionate about music declared the release date of her debut single. Along with that she also announced her US/Canada tour, Lauren Giraldo Tour. On January 27, 2017, she released her first single, Only Lovers followed by So Cool which was launched on December 1, 2017.

Lauren Giraldo has also featured on the cover page of Teen Vogue, Seventeen and Latina Magazine.

Giraldo now hosts the AwesomenessTV’s upcoming clip-show “Lauren Against the Internet” on Go90 which is in post-production.

Young Lauren Giraldo is possibly single at present. She is quite coy when it comes to revealing about her personal life and hasn't shared much about her relationship to the media. She, however, was linked with famous Vine stars Cameron Dallas and Nash Grier.

Giraldo often shared her vacationing pictures on Instagram. She also loves to spend her spare time with friends and family.

Altogether she has more than 5 million followers on different social sites which has made her a social media sensation. Apart from entertaining her audiences, she's also an advocate for women and most of her subject matter

Lauren Giraldo has earned a good sum of net worth from her career. The real figure of her net worth hasn't been revealed yet but some online sources claimed her net worth more than six-digit-number.