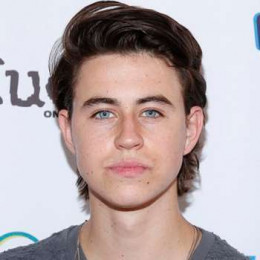 He is an American internet sensation, noted for his comedic sketch videos on YouTube and Vine, he became one of the most popular publishers on both platforms. Till date, he has gained over 12.4 million Vine followers and more than 5 million YouTube subscribers. In 2015, Time Magazine recognized him as one of the 30 most influential people on the internet.

Nash Grier is dating his girlfriend, Taylor Giavasis since 2015. The couple was expecting their first baby due in 2019. Nash also has a brother named Hayes Grier.

Previously, Grier was romantically linked with Anastasia Karanikolaou, Kylie Jenner and Princess Lauren but till now has not spoken publicly about any of them.

Nash Grier holds a net worth of $3 million from his career in social media.

Nash Grier was born on December 28, 1997, in  North Carolina to mother Elizabeth Floyd and father Chad Grier. He rose to fame as an internet personality.