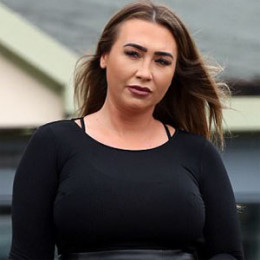 English TV personality, Lauren Goodger is well recognized as model, beautician, columnist and reality star. She rose to fame after her appearance in 2010 at ITVBe reality show The Only Way Is Essex.

Lauren Goodger was born as Lauren Rose Goodger on September 19, 1986, in Bethnal Green, London. Her birth sign is Virgo. She was raised along with her half-brother Tony and half-sister Nicola.

Regarding her nationality, she is British and belongs to Mixed ethnicity as her mother is English, whereas father is from Tanzania.

Goodger made her first TV debut with the  ITVBe reality show The Only Way Is Essex in 2010. She was one of the original cast members of the show and appeared from 1st series to 6th. In 2012, she left the show and made her comeback in the 19th season.

After Towie, she established herself as a successful businesswoman and launched a various range of beauty products such as tanning products, lashes and hair extensions under the name of Lauren's Way. In 2012, she owned a beauty salon, Lauren's Way but due to some reason, it closed on 2013.

In 2013, she participated in the eight series of Dancing on Ice, pairing with Michael Zenezini and finished in 11th position. Later she competed in the 14th season of Celebrity Big Brother. She was evicted from the show on the 24th day and became the seventh contestant to be eliminated.

She also appeared in the Channel 5' show, In Therapy in January 2017.

Lauren Goodger, 31, is possibly single at the moment but previously she dated many guys from TV world. At first, she was in a romantic relationship with her Towie co-star and radio presenter Mark Wright. She was just 15 when she started dating him.

The duo first met in 2001, their love story was also telecasted on Towie, and they even got engaged on the show. However, in 2012 they ended their 11 years long relationship.

Later, she dated Joey Morrison in 2016 while he was serving a 15 years sentence for possession of a firearm, kidnap and blackmail. Morrison proposed Goodger in Christmas with the beautiful diamond ring, and many of their close friends speculate they might have engaged.

However, the pair confirmed their break up in July 2017 for a good reason.

Goodger's net worth is assumed to be in millions of dollars as she was actively involved in reality shows as well as she had her own beauty line. Though she hasn't revealed the exact figure, she is considered as one of the highest-earning reality stars.