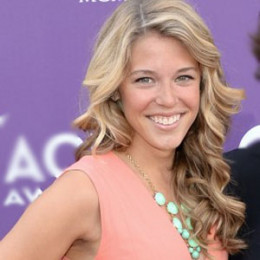 American nurse, Lauren Gregory is popularly known as the wife of Thomas Rhett Akins Jr., an American country music singer, and songwriter. She is popular because of her husband, Thomas Rhett. Her husband has released two studio albums for Big Machine Records' Valory Music imprint: It Goes Like This (2013) and Tangled Up (2015).

Lauren Gregory was born on November 8, 1989. She went to same high school with Rhett. As Lauren Gregory documented a few weeks ago, she recently made a trip to Haiti to raise awareness for the 147 million orphans in the country.

Lauren Gregory's husband Thomas Rhett proposed her at favorite Nashville restaurant.The couple got married outside Nashville at Front Porch Farms in Charlotte, Tennessee, on 12th October 2012.The pair dated for only six months before they got engaged in December of that year.

However, the couple knew each other ever since they were in the first grade. They first began dating when they were both fifteen but ended things after six months. Both of them remain close friends despite having other relationships for the next few years.

The couple always wanted children. So, in the later months of 2016, they began the process of adopting a baby from Africa. They adopted Willa Gray Akins on 12th May 2017.

They announced their decision to adopt in February, at the same time they revealed that Gregory was pregnant with the couple’s first child and expected to be born on August 2017.

Regarding her nationality, Lauren Gregory is American and belong to white ethnicity.A gorgeous nurse stands at height of 5 feet 4 inches. Her husband Thomas Rhett has a net worth of $5 million dollars.

Lauren Gregory is popularly known as the wife of Thomas Rhett.The couple got married on 12th October 2012.

They began the process of adopting a baby from Africa. They brought Willa Gray Akins home on 12th May 2017.