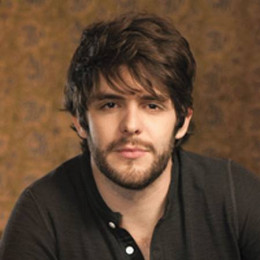 An American country music singer and songwriter Thomas Rhett who became widely popular after his five singles from his first album "It Goes Like This" went to number 1 on Country Airplay. He is son to Rhett Akins who had a successful career as a country western singer. When he was still in junior high school he learned how to play drums and he used to play drums for his father when he was on stage. He attended Lipscomb University and when he was still in college he released Something to Do with My Hands, and Beer with Jesus which charted on Top 30 country music singles.

Exploring his personal life he is already married to his childhood sweetheart Lauren Akins. They knew each other since their first grade. Since he has been committed to her from his childhood we can easily guess he loved her truly. Together they seem to be a cute couple.

One day of skiing left! A couple years from now Willa will be dusting all of us down the mountain

Their marriage was performed in a ceremony in the presence of their family, relatives, and friends.

The couple adopted a baby girl Willa Gray Akins (b. November 1, 2015) from Uganda. They welcomed their second daughter Ada James Akins on 12 August 2017.

He mentioned his wife and daughters in his song "Life Changes".

Rhett has an estimated net worth of about $5 million as of 2019.

He attended Lipscomb University in Nashville, Tennessee. He released three studio albums till dated including  It Goes Like This (2013), Tangled Up(2015), and Life Changes(2017).

They knew each other since they were kid. They used to study in same school. Her picture along with him can be found in different sites.