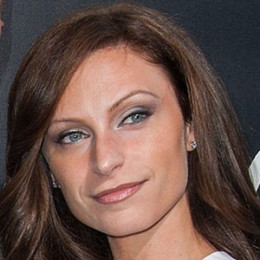 Lauren Hashian is an American singer-songwriter. She also appeared on the TLC's show R U The Girl. Lauren also performed on stage with her father, John. Recently she came to highlights for dating Dwane Johnson.

Lauren Hashian is singer-songwriter and now is also known as the girlfriend of Dwayne “the Rock” Johnson. She was born on September 8, 1984, in Lynnfield, Massachusetts, USA, to father John ‘Sib’ Hashian, a former drummer of classic rock band “Boston,” and mother, Suzanne Hashian.

She is an American by nationality and holds white ethnicity. Lauren loved music, since her early age. Her father passed away at the age of 67 while performing on a cruise ship, suffering from heart attack.

Following her father's passion, she started a career in music. Lauren appeared as one of the finalists in R U That Girl in the 2005 competition on TLC, hosted by Chill and T-Boz. She co-wrote and sang on the track for Yaboi Shad.

In 2005, she joined her father on stage, when he organized a special concert with Boston guitarist Barry Goudreau. Later, she sang with her dad’s band, Ernie, and Automatics.

Lauren Hashian is not married yet. However, she is in a relationship with Dwayne Johnson, the famous actor and professional wrestler of WWE, since March 2007. They have a daughter together born on 2016 named Jasmin.

Lauren and Dwayne first met in 2006, when Dwayne was in Boston to film “The Game Plan.” At the time, Dwayne was married to his first wife, Danny Garcia. Dwayne has a 14 years old daughter from his first marriage with Danny Garcia.

Lauren was on highlights in media, for her relationship with Dwayne. She was also blamed for the divorce of Dwayne and his former wife, Danny. However, Hashian is in good terms with Danny and very often seen together accompanying The Rock to his movie premieres and award show.

As of 2017, Lauren Hashian’s net worth his under review. She is not so famous celebrity like her longtime boyfriend Johnson. However, Dwayne has an estimated net worth of around $190 million.

Jasmin is the first child of the singer-songwriter Lauren Hashian and her long-term boyfriend, Dwayne Johnson, who is an actor and a professional wrestler.