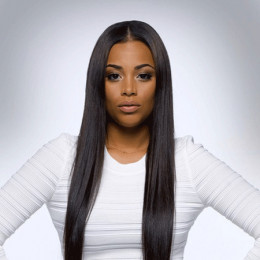 An American film actress, hip hop model and television personality who is well known for starring as Kiera on The Game alongside Tia Mowry. She is born to African-American mother and a Jewish father. She attended Palisades High School. Since she was mostly for audition of films, music videos and commercials she was later home schooled. She has already starred in music videos of popular singers like Tyrese, Ludacris, Pharrell, and Snoop Dogg. In 2006 she debuted in television screen by starring in an episode of Everybody Hates Chris. In 2011 she was seen in recurring role as Shelley in TV series Single Ladies. She also starred in film named ATL where shew as seen as hip hop artist T.I.'s romantic lead. For that role she was nominated for Best Supporting Actress.

Exploring her private life she has not married yet. She is not single too. Currently she is off the market. she has been dating an American rapper. Prior to dating him her name has been linked with couple of hip hop artist. She also dated popular hip hop singer and rapper Lil' Wayne. Together they were parents of one baby boy. They have already broke up for some personal reasons.