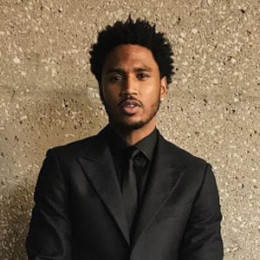 Trey Songz is a popular American singer, songwriter, actor, and rapper. He started his professional career after signing a record deal with Atlantic Records. In 2005, he released his debuted album titled, I Gotta Make IT. Currently, Songz has the collection of his seven albums.

Trey Songz was born Tremaine Aldon Neverson on 28th November 1984 in Petersburg, Virginia. Songz's birth sign is Sagittarius. He is American as per his nationality and as far as his ethnicity is concerned, he is African-American.

Songz is the son of April (Gilson) Tucker and Claude Neverson Jr. He has three siblings, Forrest, Alex, and Nikki. When he was seven years old, his mother remarried to a U.S. Army officer.

Songz spent his early days traveling around different places, as his step-father was stationed at different military bases. At the age of 14, he along with his family returned to Petersburg.

Songz was talented from his early days but due to his shy nature, it did not come out. He recognized his abilities at the age of 14, as the people started noticing he sounded good.

Songz attended Petersburg High School as a freshman in 1998. The following year, he participated at the Appomattox Regional Governor Talent Show. He also formed a vocal group, All Night Productions with his close friends during his time at the high school. He graduated from the high school in 2002.

Songz moved to New Jersey and started working on his debut album in 2002. He signed a contract with Atlantic Records in 2003, receiving $100,000 in advance. His step-father and record producer Troy Taylor were high school friends. His step-father introduced him to Troy, which led him to sign the contract.

Songz's debut single from the album was Gotta Make It featuring Twista. The song was released in March 2005. It ranked #87 on the Billboard Hot 100 and #21 on the Hot R&B/Hip-Hop Songs.

In 2008, Songz started working on his third studio album, Ready with Sean Garrett, Stargate, Bryan-Michael Cox and Troy Taylor. The album was released on August 31, 2009, ranked #3 on the Billboard. The album made the total sales of 131,000 copies in its first week.

Songz released his fourth studio album, Passion, Pain & Pleasure on September 14, 2010. He was featured with Nicki Minaj in the album's lead single, Bottoms Up. The song released on July 27, 2010, and ranked #6 on the Billboard Hot 100 becoming the greatest hit to date.

Song's fifth album, Chapter V was released on August 21, 2012. The album was a great success selling 135,000 copies in its first week. The album ranked #1 on the U.S. Billboard 200. The album consisted 19 singles including Grammy-nominated hit Heart Attack, UK hit Simply Amazing, and the US hit 2 Reasons.

Songz has entertained his fans by giving many hit numbers to date. He released his seventh album, Tremaine the Album on March 24, 2017. The album ranked #3 on the US Billboard 200. The album debuted behind Drake's album, More Life and Ed Sheeran's album, Divide (÷).

Besides, Trey Songz is active in acting as well. Songz made his Hollywood debut from the movie, Queens of Media in 2008. He was cast alongside Robin Givens, Chandra Davis, Michael Boatman, Fredro Star, Lil’ Kim and Thea Vidale.

Songz debuted on TV from the TV series, Lincoln Heights in 2009. He appeared in an episode, Relative Unknown in the series. In the series, he appeared with Rhyon Nicole Brown, Erica Hubbard, Russell Hornsby, Nicki Micheaux, and Robert Adamson among others.

Songz's other works include When I Was 17, Baggage Claim, Total Divas, and Texas Chainsaw 3D among others.

In 2017, Songz appeared in VH1's reality dating series, Tremaine the Playboy. The show is a look-alike version of the popular show, The Bachelor, featuring a house of 17 girls each battling for Trey Songz’ love.

Trey Songz has been nominated for various prestigious awards for his amazing performances in his career. Here's the list of the awards, he won to date:

Trey Songz is unmarried and has no children. The popular singer is currently single after numbers of breakups in the past. He was linked with reality TV star, Khloe Kardashian. They were spotted partying together in Las Vegas.

Songz has known the family for years. In July 2014, he and Chris Brown partied with Kardashian's half-sisters, Kylie Jenner, and Kendall Jenner.

Prior to this, he was linked up with many popular faces such as Tahiry Jose, Lauren London, Drew Sidora, Nicole Bitchie, Mariah Carey, and Mila J among others.

Songz became friends with Lauren at the first and eventually fell in love with each other. The couple stayed in an on-off relationship for a long period before separating their ways.

Songz was also in a relationship with Tanaya Henry. They were together for a long time but broke up later on, for some unrevealed reasons.

Besides, his dating life, Songz is a family man and is very devoted to his family and especially his mother. He bought a new house for his mom from his first earning for his album.

Trey Songz was charged with several allegations of assaulting a police causing injury and aggravated assault in 2016 while performing in Detroit. The police accused him of,

‘’throwing objects after the venue cut his concert short due to an 11:30 pm curfew and struck an officer with his fist.’’

In 2017, Songz was sentenced to 18 months of probation after he pleaded guilty. He was then sent to anger management classes and pay some restitution for the incident.

Trey Songz, who released his debut album in 2005, currently has an estimated net worth of $10 million.

Songz made a good collection from his songs and albums:

Apart from this, some of Songz’s movies that made a good collection at the box office include: