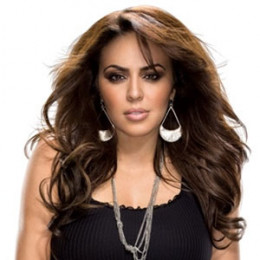 Layla EI is well known as the professional retired wrestlers of the United States as well as a dancer, model. She is best known for her time in WWE. On 29th July 2015, Layla announced her in-ring competition retirement. As a professional wrestler, she won WWE Women's Championship in 2010 and also WWE Divas Championship in 2012. EI was a professional dancer for the 'Miami Heat' before she focused on wrestling. She debuted WWE in 2006 as a contestant in the WWE Diva Search.

Layla El was born on 25th June 1977 in London, England. Her father is of Spanish descent. El's mother died at the age of 48 due to breast cancer.

She was born and raised in England, and presently, she resides in Phoenix, Arizona, United States. Layla attended a performing arts college in London.

Layla El entered the WWE after winning the Diva Search 2006. She made her first official WWE appearance in 2006 SummerSlam payer-view in a backstage segment with several other Divas.

On 20, October, El participated in a dance contest with the other SmackDown! Divas, and was chosen as the winner by the judges, Nick and Aaron Carter.

On 13th June episode of WWE Superstars, she lost to Paige in what would be her final televised match. On 29th July, WWE announced that she had decided to retire from professional wrestling.

Layla El has featured in magazines like King, Smooth, and also was the cover-girl for the first issue of Liquid.

On 6th February 2008, she appeared on Project Runway with several WWE Divas as part of the week's challenge also appeared on 13th April 2008 episode of Celebrity Fit Club Boot Camp as a trainer.

Currently, she works as a choreographer, costume designer and performing member of Extreme Expose' dance squad on weekly on ECW on the Sci-Fi Channel.

She then dated fellow wrestler Richard Young, a professional wrestler known as Ricky Ortiz. He previously played professional football in the NFL, AFL, CFL, and XFL.

On 28th July 2015, the couple got engaged and married on 27th November in Glendale, Arizona. They worked together on the SmackDown brand in 2009 included an in-ring skit and El appearing on Young's short-lived WWE.com show. Till date the couple doesn't have any children.