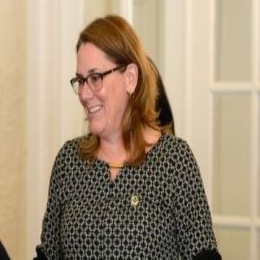 Leah Esper is the wife of the current US Acting Secretary of Defence Mark Thomas Esper. Besides being a supportive wife to Mark for over three decades she also engages in the welfare of the military personnel and their family.

Leah Esper is happily married to the current US Acting Secretary of Defence Mark Thomas Esper. Mark who was in active duty in the military was deployed in the Gulf War shortly after the marriage. 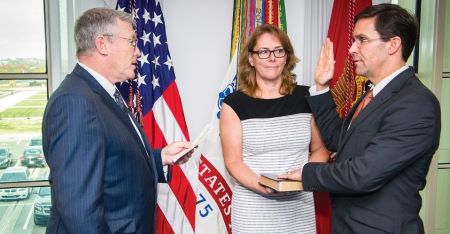 Leah Esper with her Husband Mark Esper during a swearing-in ceremony.

Like every other military family, Leah and Mike experienced lots of moving around. They moved four times in five years early on their marriage. Further, she acknowledged that moving around is the hardest part of being a military spouse and stated :

"Moving around … it is hard to have a career. It's hard to have that continuity with friends … that part is hard. But the great thing is, the military is a huge family. So, you sort of have a family no matter where you go."

The couple is blessed with three children, sons Luke Esper and John Esper and a daughter, Kate Esper. Their first child Luke was born in overseas Army Hospital.

Mike Esper is aware of the hardships faced by a military spouse and praised Leah for being the family's rock during a Senate confirmation hearing in 2017.

Leah Esper who is 55 years old did not have a stable career because of all the moving she had to do because of her military husband. Esper is however engaged in projects supporting servicemen and their spouses. Also, she is involved in different community works such as being President of an Athletic Booster Club in Fairfax County, Virginia, USA. 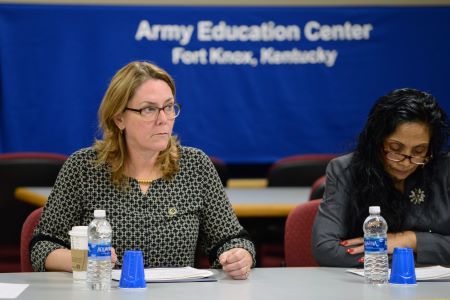 Esper might not have independent net worth but she does share the net worth of her spouse with whom she is married for over 30 years. It is reported that Mike Esper overall net worth is around  $5 million - $15 million.

Besides the military salary, Mike Esper earned his wealth through his work as a senior executive at Raytheon and lobbyist for the Aerospace Industries Association of America and the U.S. Chamber of Commerce. 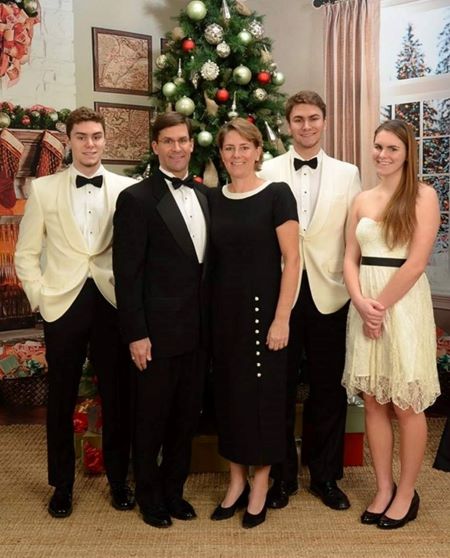 Leah Esper with her family.

According to the financial disclosure, Mike made to Office of the Government Ethics (OGE) he earned a yearly salary of $1.5m at Raytheon. Also, it was mentioned in the disclosure that Mike shares a residential real estate worth $100,000 with his wife in West Virginia and more than $17,000 in cash saved in bank accounts.

Mark Esper is the current Acting Secretary of Defense of the US. Esper was previously the Secretary of the Army.

Luke Esper is the first child of Mark Esper and Leah Esper. He has two more siblings.

Mark Esper is the second child of Mark Esper and Leah Esper. He has two more siblings.

Kate Esper is the third child of Mark Esper and Leah Esper. She has two more siblings.