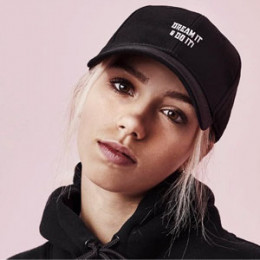 A musical.Ly star, Lena Mantler is also the owner of clothing house, Compose. Lena worked along with her twin Lisa. They together have their own merchandise consisting of gym bags, apparel, accessories, phone cases and hair styles too. Lena is living a great life with her family and is currently single.

Lena was born on 17th June 2002  in Stuttgart, Germany along with her twin sister Lisa. She also has an elder brother, Tim and elder sister, Tayra. Tayra is a media phenomenon.

Lena is the citizen of Germany and is of white ethnicity. She and her twin are fond of soccer.

Lena started her career with Lisa from the young age of 11, involved in clothing designs. Later on, at the age of 13, they engaged in a clothing design company Compose. They gained huge popularity from their work.

Lisa and Lena's fan requested them to join the YouTube channel and to post videos. As English not being their native language, they were uncomfortable to post videos. However, Lena and Lisa joined musical.ly in mid-2015 and posted several musical videos. They succeed to earn more than 19 millions fans in musical.Ly and their videos had millions of audiences.

In future, they are planning on building their career in the acting field. They are working for the movie with Matthias Schweighofer.

Though Lena is very active on social media, she has never posted photos or mentioned anything about her dating life and affairs. When it comes to her relationships, it looks like she is very private.

However, there were rumors about she having a boyfriend but it may be just a made up story by her fans. Mantler is possibly single.

Lena's actual salary and net worth are still under the curtains. But looking at her lifestyle and expensive clothes she wears, she may have a worth in six figures. Currently, she is also working on a movie.