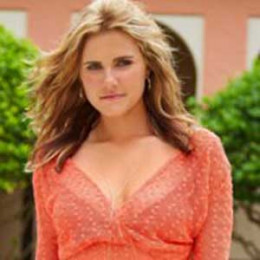 Lexi Thompson was the youngest golfer ever to qualify to play in the U.S. Women's Open. She was 12 years old when she played her first game. She turned professional in June 2010 at age 15. In 2014, she won Kraft Nabisco Championship which was her first major championship.

Alexis "Lexi" Thompson, known as Lexi Thompson is an American professional golfer. She was born on February 10, 1995, in Coral Springs, Florida, U.S to father Scott Thompson and mother, Judy Thompson. She was raised along with her two brothers, who are also a professional golf player, Nicholas Thompson, who plays on the PGA and Web.com Tours and Curtis Thompson, who plays on the Web.com Tour.

Alexis was home-schooled, She told in an interview in September 2012 that she had "graduated a few months ago."

In 2007, when she was 12-year-old, she became the youngest player for the U.S Women's Open, where she shot 86-82 and fall to make a cut and was surpassed in 2014 by Lucy Li. In the same year, she won the Aldila Junior Classic to become the second-youngest winner in American Junior Gold Association (AJGA) and also won the Westfield Junior PGA Championship to become the youngest winner in Junior PGA Championship history.

On June 16, 2010, Thompson announced that she began her professional career, signing a sponsorship deal with Cobra-Puma Golf and with Red Bull. She played qualifiers in Florida in May to gain entry in the U.S Women's Open played July 8-11, where she finished T10 at the tournament behind winner Paula Creamer and earned her first professional check for $72.131.

She played three more events on LPGA Tour in 2010, at the Canadian Women's Open, and finished T16 and T57 in two additional events. She gained her fourth career LPGA win and first major championship at 2014 Kraft Nabisco Championship, which made her the second-youngest women's winner.

In 2017, at the Honda LPGA Thailand, she earned her seventh LPGA Tour Win. On the LPGA Tour of Japan, she achieved her first victory at the World Ladies Championship Salonpas Cup.

Even though she is popular and famous, she provided very little information about her personal life and affairs. We can assume that she doesn't have any boyfriend till date or maybe she doesn's want any public and media attention in her personal life. She is not married yet and focusing on her career.