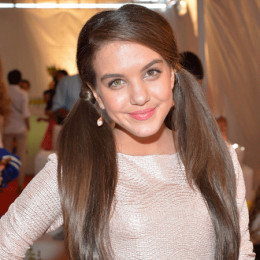 The beautiful and gorgeous young actress who is best known for the breakthrough role in 2015 as Sophie in Nickelodeon's Bella and the Bulldogs. From her young age, she was a very creative and fun little girl. When she was just 4 years old she had taken part in "Queen of the Carnival" which is a beauty pageant program in her native country. She has also completed courses in acting and Media from John Casablancas Career Center.

Lilimar Hernandez was born on June 2, 2000, in Margarita Island, Venezuela to Cuban parents. Gemini girl belongs to the Latin American descent and holds an American nationality.

Lilimar has heterochromia with one eye being brown and the other green/hazel. She is a popular Venezuela teen actress who is known for her role as Sophie in Bella and the Bulldogs.

At the age of 6, she moved to Miami with her family and started taking classes at the age of nine. Hernandez took part in a beauty pageant "Queen of the Carnival". at the age of four.

She attended the John Casablancas Career Center and completed her courses of acting and Media. She lives in Los Angeles with her grandmother and with her mother, Mayte after getting the role of Bella and the Bulldogs.

Lilimar made her television debut in 2006 from Sábado Gigante. Later in 2013, she appeared in Rosario and Smart Alec. Her performance in Bella and the Bulldogs as Sophie took her in the new height of popularity.

Even she lends her voice in The Little Ghost. She worked in short movies too such as Pedro Pan and Last Children.

Lilimar is a teen actress and that might be the reason she hasn't been linked with any guy which means her current relationship is single. She is very secretive about her personal life and she didn't like to disclose her private stuff in the media.

Considering her amazing career it might be sure she has an impressive net worth around $500 thousand.