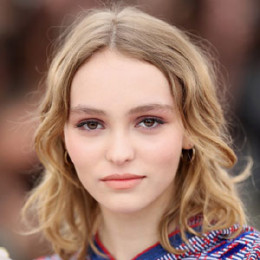 Lily-Rose Melody Depp, better known as Lily-Rose Depp, is a French-American actress and model. She has appeared in the movie Tusk, Yoga Hosers, The Dancer, and Planetrium. She was nominated for Cesar Awards and Lumieres Awards for her great performance in the French biographical musical drama movie �The Dancer� in the year 2016. She is the daughter of versatile actor Johnny Depp.

Born on 27th May 1999, as Lily-Rose Melody Depp is a daughter of Johnny Depp, an American actor, producer and musician and Vanessa Paradis, a French singer, actress and model. She is the older sister of Jack John Christopher Depp III and niece of French actress Alysson Paradis.

Lily dropped out of high school in 2016 when she was 17 and started focusing on acting career.

Lily-Rose made her acting debut from the movie Tusk which released in 2014. She made a cameo appearance in the film where she has portrayed the character of Colleen Collette. The movie's cast included Michael Parks, Justin Long, Genesis Rodriguez, Johney Depp, Harley Morenstein.

After two years, she landed a lead role in the movie Yoga Horse on 2nd September 2016. The movie has box office collection of $38 thousand.

The same year, she appeared in the movie Planetarium in which she played the role of a dancer. Her performance won two nominations: Cesar Awards and Lumieres Awards.

Lily-Rose dated a British model Ash Stymest from July 2016. Before his relationship with Lily, he was a married man. He also has a four-year-old daughter from that relationship.

Lily and her boyfriend were spotted together traveling and shopping at the Chanel store in Beverly Hills. They looked very happy in each other's company before they eventually broke up. In 2021, Depp began dating actor Austin Butler.

Lily-Rose is one of the successful actresses to receive huge name and fame in short period. Her salary and net worth have no been revealed yet but looking at her successful career, she definitely must have a huge net worth.