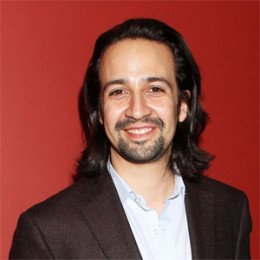 Lin Manuel Miranda is a well-known American composer, playwright, lyricist, and actor. He is famous for portraying and creating the Broadway musicals "In Hamilton" and "In The Heights". Miranda has also co-written the songs for "Moana" soundtrack in 2016.

Married to Vanessa Adriana Nadal since 2010, Lin-Manuel Miranda is living a happy life with his wife and children and has gathered along a huge amount of net worth.

Lin-Manuel Miranda was born on 16 January 1980, in New York City, and grew up living in the neighborhood of Inwood. He was born to parents Luis A. Miranda, jr., a Democratic party consultant who advised NYC mayor Ed Koch, and Luz Towns, a clinical psychologist.

Ugh I think I'm getting sick Which is your favorite Lin? (Youngest- Oldest= 1-6)

Miranda also has a sister named Luz. During his late childhood and teenage years, Miranda used to spend much time with his grandparents in Puerto Rico. As a kid, Miranda wrote jingles, one was later used for Eliot Spitzer's 2006 gubernatorial campaign. Miranda studied at Hunter College Elementary School and later joined Hunter College High School.

After graduating from high school, Lin-Manuel Miranda joined Wesleyan University and co-founded a hip-hop comedy group called as Freestyle Love Supreme. In his sophomore year of college, Miranda wrote the earliest draft of In The Heights. He graduated from the University in 2002.

In 2002, Lin-Manuel along with John Buffalo Mailer collaborated with the director Thomas Kail to revise In The Heights. The musical was also nominated for over 13 Tony Awards. On 15 Feb 2009, Miranda left the cast of the Broadway production.

He has also done other works for the stage. He wrote dialogues in Spanish language and collaborated with Stephen Sondheim to translate into Spanish song lyrics for the revival of West Side Story.

In 2007, Miranda made a guest appearance on the television series The Sopranos in the episode Remember When. In 2009, he portrayed "Alvie", Gregory House' roommate in a hospital, on the season six premiere episode of House.

During this time, Miranda also served as an English teacher in his previous high school, a writer for Manhattan Times as a columnist, and composed music tracks to advertisements.

In 2011, Lin-Manuel Miranda made his appearance on the television series Modern Family in the episode ''Good Cop Bad Dog.'' He portrayed as Charley in Encores! staged concert of Roll Along in Feb 2012.

Miranda read the biography of Alexander Hamilton which inspired him a lot and for the tribute, he wrote a rap about Hamilton which he performed for the White House Evening of Poetry, Music and the Spoken Word on 12 May 2009.

Hamilton, the musical show based on the Hamilton Mixtape, premiered off-Broadway at The Public Theater in 2015 Jan. The show was directed by Thomas Kail. Miranda also wrote the book and portrayed as the title character. The show had high positive reviews, and its engagement was sold out.

ok, um why are they so perfect?!

Miranda also won 2015 History Makers Award from the New York Historical Society for their credit in making the musical. The same year, Miranda credited in music for the movie Star Wars: The Force Awakens. He wrote a song for the scene in Maz Kanata's Cantina.

In May 2016, Lin Manuel-Miranda won an honorary Doctorate of the Arts from the University of Pennsylvania and also gave a commencement speech. The same month for his portrayal as Alexander Hamilton, Miranda won the Drama League Distinguished Performance Award.

From 2014-2016, Miranda teamed up with Mark Mancina and Opetaia to write the music for Moana. He also did a duet recording with Jordan Fisher on the song You're Welcome. On 8th October 2016, Miranda made his appearance as a host on Saturday Night Live. The following year he also received a nomination for Emmy Award.

Lin-Manuel Miranda is set to portray in the upcoming movie Mary Poppins Returns along with stars, Emily Blunt, Ben Whishaw, Emily Mortimer, Colin Firth and so on. The movie is directed, Rob Marshall. He will also be the composer and producer for the upcoming movie, The Kingkiller Chronicle. He's set the deal to produce 11 songs in the coming Sony Pictures Animation movie, Vivo and also in 2017 reboot of DuckTales.

In 2010, Lin-Manuel Miranda married a lawyer at the law firm Jones Day, Vanessa Adriana Nadal, who is also his high school friend. The couple welcomed first child a son Sebastian Miranda(born in 2014). On 2nd Feb 2018, they welcomed second child Francisco Miranda, as Nadal confirmed it through Twitter.

Lin Manuel earns a good amount of money from his versatile career as an American composer, lyricist, actor, and playwright. Miranda's current net worth is estimated to be $10 million.

His one of the most popular theatre credit includes Hamilton, in which he took more than $6 million cash in 2016. The musical drama grossed more than $100 million through ticket sales. He also earns 7% as a sole author for the production which means he will make $105,000 in royalties per week.

In March 2016, after a meeting with former President of the United States, Barack Obama, Miranda joined U.S. Senator Charles Schumer, Elizabeth Warren, and Kristen Gillibrand and other Democratic lawmakers for congressional action to back a Senate bill in Washington which will allow Puerto Rico to announce its bankruptcy and help it debt burden of $70 million.

Lin-Manuel Miranda married his wife Vanessa Nadal, who was a high school friend back in 2010. They are blessed with two children.