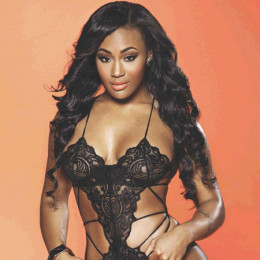 An American model Lira Galore who has got the enormous following on Instagram with more than 1.5 million followers. She has done modeling for many popular companies including Hip Hop Weekly magazine in 2014. In beginning, she established herself as the Instagram model. Her Instagram is filled with filled with super sexy bikini photos flaunting her hot body. She is very close friend with Blac Chyna and Amber Rose.

Talking about her relationship status, she has not married yet. But since she is so sexy and hot model its obvious she has dated number of handsome hunks including popular players and singers.

The hot model also dated rapper boyfriend who is best known as Rock-y Rozay. It was confirmed that she got engaged with him after she revealed sparkling new ring via Snapchat and Instagram. The couple is planning to get married soon.

Previously, she was engaged to Rick Ross. She called their engagement "toxic". She said,

"I’m angry because I want out black men to value us and they don’t."

She shared an Instagram video and confirmed that she's pregnant with the Quality Control headman Pierre "Pee" Thomas' baby.

On behalf of me .. ima just stay pregnant (Tap for Details)

After graduating from high school with honors she started working as a stripper at 18.

"I started dancing when I was 18 and that’s kind of how I got into it. But I started doing photo shoots around that time. And then I stopped dancing and did more modeling."

"Dancing taught me a lot about money—how fast it comes and goes. It also teaches you a lot about saving money. Getting to the next level. Putting all my time and energy into myself and my career."

In September 2016, she appeared on Iyanla Vanzant's show Fix My Life on the Oprah network.