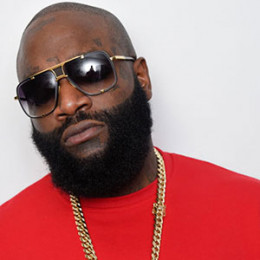 Rick Ross is a successful rapper and entrepreneur and record executive. He also holds a record label and various other company to his name. Ross is also one of the highest paid rappers of 2018. He founded the record label Maybach Music Group in 2009.

Besides his successful professional career, his personal life is full of ups and downs. The father-of-four is currently dating Briana Camille after a long list of unsuccessful love life in past.

Rick Ross summoned a hefty wealth through his successful musical career, endorsements, and variety of business ventures. His estimated net worth as of 2019 is $35million.

‘Lamborghini doors I wanna touch the sky’ - #GreenGucciSuit Available on all streaming platforms. #POM2 on the way,Boss.

Forbes named him as one of the highest paid rappers of 2018. Reportedly, His annual income totaled a whopping $9million last year. His major source of income is his Record Label company, Maybach Music Group.

Also, Ross has some of the highest grossing albums of all times to his name. He collected an estimated total of $15million through album sales alone. Moreover, he tours the world with his songs through which he earns in the range of $100k to $2m.

He is a car fanatic and boasts a wide variety of supercars in his collection. His favorites are his Caddalac and Maybach which sets his back account back around $100k.

Rick Ross is in a committed relationship as of now. He is currently in a relationship with his girlfriend, Briana Camille. The lovebirds also share two children together Billion Leonard Roberts, born in November 2018 and a daughter named Berkeley Hermes born in September 2017.

Say wut up to my amazing son @billion.heir

He was engaged to the hip-hop model Lira Mercer. But their engagement was shortlived as they ended their relationship in November 2015.

Ross dated fashionista Lastonia Leviston. They parted ways back in 2013 due to some undisclosed reason. The former couple also shares a daughter named Toei Roberts.

Also, he has a son named William Roberts III, 12, from his previous relationship with Tia Kemp. In 2010, he paid $2800 a month to his baby mama Kemp as child support.

Tia filed a lawsuit demanding an increment in child support. The case was settled in 2018. As per some reliable sources, he agreed to pay the money directly in Kemp's bank account.

Rick Ross suffered from two seizures while he was on an airplane. When he suffered the first seizure Rick insisted to keep the plane going but after he suffered a second one he was rushed to the hospital. Doctors found out that the major cause of the seizures was a lack of sleep.

Rick Ross was born William Leonard Roberts II on January 28, 1976, in Clarksdale Mississippi. His childhood was full of hardships as he grew up in the poverty-stricken areas of the north of Miami. Ross was interested in street music right from his early days and used to actively follow the work of artists like Notorious B.I.G., Luther Campbell, etc.

He went to Miami Carol City Senior High School. Then, Rick got admission in Georgia’s Albany State University through a football scholarship but was not interest in Academics and dropped out a year later. He then started concentrating on his musical career while making a living by selling drugs.

Billion is the lovechild of Rick and Briana. The couple took to Instagram to reveal the pregnancy.

Toie is the eldest born of Rick Ross. While he was dating Lastonia the beautiful baby girl was born.