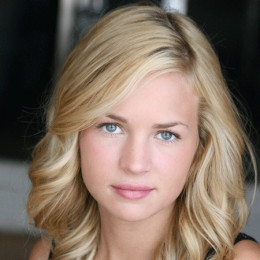 Britt Robertson is widely known for her lead role in the 2015 film Tomorrowland. She is daughter to Beverly Robertson and Ryan Robertson. Nylon Magazine's Young Hollywood Issue considered her as one of the 55 faces of the future. For the outstanding role in White Rabbit, she was awarded Best Supporting Actress.

Who is Britt Robertson Dating Currently?

White Rabbit actress, Britt Robertson is kindling romance with her boyfriend, Graham Rogers from early 2019 till today's date. As the lovebirds have been in a committed live-in together relationship they'll soon walk down the aisle too.

Robertson was in a romantic relationship with her co-star, KJ Apa with whom she shared the screen in a biopic romance film, I Still Believe till the mid-2018.

People began speculating if the two are dating after KJ and Robertson were seen kissing and holding hands at Comic-con party. They've formerly worked in the 2017 film A Dog's Purpose.

People confirmed, they were holding hands throughout the night on July 21, 2019, and Britt was spotted with his arm wrapped around her waist. Furthermore, Apa, 22, and Robertson were seen sharing a kiss and strolling around with Apa's Riverdale co-stars.

Robertson and her supposed partner KJ Apa was last pictured in a December 2018 Instagram post where they posed at the beach.  Except for Apa and Dylan, Robertson was rumored of having an affair with Gregg Sulkin.

Previously, she has involved in a long term romantic relationship with Dylan O'Brien since 2011. She met Dylan on the set of the movie The First Time, which was released in 2012. Robertson and Brien remained in a lovey-dovey relationship for six years.

Back in 2017, Britt's Instagram account was hacked, the hackers posted a picture, she and Dylan were engaged. After a few hours of viral news, the photo was immediately removed, the duo's reps confirmed it was just a hoax.

How Much Is Britt Robertson's Net Worth?

Britt Robertson, an American actress possesses an estimated net worth of $2 million. She receives a salary of $30,000 per episode per hour for her appearance in TV series.

The 29-year-old actress has been actively involved in the industry since 2000. She even garnered a Young Artist Award nomination for Best Performance in a TV movie, Miniseries or Special Leading Young Actress for her role in The Ghost Club in 2003.

Some of her acting credits include Law & Order Criminal Intent, Women of a Certain Age, Growing Pains: Return of the Seavers, Swingtown, The Secret Circle, I Still Believe,  A Dog's Purpose.

The blonde beauty bags huge revenues from ads and endorsements too. For instance, Britt earns $2,561.25 - $4,268.75 per ads post for amassing over 857,749 followers on Instagram. She's paid big bucks for endorsing a brand, Louis Vuitton.

Britt Robertson aka Brittany Leanna Robertson was born on April 18, 1990, in Charlotte, North Carolina, U.S. She is a daughter of Hayes and Ryan Robertson, a restaurant owner. The starlet was raised in Greenville, South Carolina.

Brittany has six other siblings from her stepfather and stepmother. At the age of fourteen, Robertson switched from North Carolina to Los Angeles to audition for TV pilots.