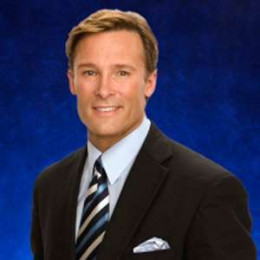 An American actor and newscaster, Lonnie Quinn is currently married to Sharon. He graduated from Boston College with a bachelor's degree in communications. Lonnie received a meteorology certificate from the Federal Aviation Administration. He is the lead weather anchor on WCBS-TV in New York City. Quinn used to serve as weather anchor for CBS "This Morning Saturday". He also appears frequently on sister radio station WCBS-AM 880 for their weather reports.

Lonnie Quinn Personal Life; Who is his Wife?

Lonnie Quinn is a married man. He married Sharon on 13th January 2007. He lives with his wife, Sharon and two children from his previous relationship, a son named Nate, and daughter Savannah in Upper West Side of Manhattan. There is no record of Lonnie about his past relationship, girlfriend, affair or dating.

The couple lives together with their children and also pets a dog. Lonnie is quite secretive about his married life and doesn't like to divulge much about it to the public. His family lives in Upper West Side of Manhattan.

Lonnie even never shared the news about his marriage to his fans. The weatherman is quite active on his Twitter account where he has over 12k followers.

Lonnie Quinn has worked in the news channel his whole life and surely, he must've amalgamated a huge fortune out of it.

According to many sources, his current net worth stands at $300k. The main source of his income is his work as the weather anchor for the WCBS-TV. The typical salary for a news anchor ranges from $160k to $180k.

Lonnie Quinn was born on August 9th, 1963, in Cheshire, Connecticut, the United States. His parents had in total of seven children, including sons and daughter.

Speaking of his education, he attended The Bronx High School of Science. Lonnie Quinn also appeared as himself in two episodes of "As the World Turns" in November 2009.

He also did his part in the movie field. He is recognized for creating the role of Will Cooney in the ABC's series, All My Children.

He married Sharon on 13 January 2007. He is living his life with his family so there is no chance of separation.

Nate is the first child of his. He has one younger sister. Nate is currently studying at Cornell University and previously attended The Bronx High School of Science.

She is the second child of his. She has one elder brother. Her parents already separated.