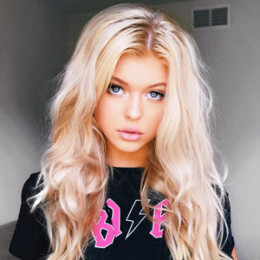 Loren Gray is a social media star, best known for her musical.ly account, @lorengray. She has been active in social media since 2013 and has millions of followers on musical.ly. Gray is also an actress, dancer, and model. She is also a popular YouTuber and has gained popularity through her self-titled YouTube Channel.

Loren Gray was born Loren Gray Beech on April 19, 2002, in Pennsylvania, USA. She is American by nationality and belongs to White-American ethnicity.

Gray has posted some pictures of her family members but has not disclosed their names. She was homeschooled during her early years and is currently getting her high school education.

Loren Gray started her career as a child model. She featured in magazines such as Teen Vogue and Seventeen. She has modeled for several footwear and clothing brands.

Gray is popular for her social media presence as well, she is active on Twitter since March 2013. She is active on Instagram as well. Additionally, she has thousands of followers on her YouNow account.

Gray has also shown her active involvement in musical.ly, a global video community. Her account, @lorengray on musical.ly has millions of followers.

She also runs her self-titled YouTube channel and has millions of subscribers. It is a fairly new channel where she has posted some tutorial videos and a cover of the popular song, New Rules by Dua Lipa.

During early 2017, Gray became a member of the tour group including Nathan Triska, Blake Gray, Tyler Brown, and HRVY.

Famous social media star, Loren Gray is unmarried as of early 2018. She was, however, involved in many relationships in the past.

thank u for having me @teenvogue

Previously, Gray was in a relationship with Joey Kisluk, an internet star, and musical.ly celebrity. They dated for a year and separated in 2016. During the time, Gray was twelve-year-old and Kisluk was fifteen-year-old.

In July 2016, Gray and Mark Thomas were rumored to be dating. However, they denied the rumors and said that they were just good friends. Thomas is an English comedian, presenter, political satirist as well as a journalist from south London.

Gray also had an affair with social media star, Juwany Roman. They split up after dating for some months. They didn't disclose the reason behind their break up.

Gray was linked with English singer and online personality, Harvey Cantwell as well. The duo was spotted at All Bar One surrounded by a huge crowd of fans outside the pub. They had to be guarded by police during the time.

Net worth Of Loren Gray

Loren Gray earns an impressive amount of money from her YouTube career as well as online commercials. She has millions of subscribers and followers on her social media sites.

Gray’s estimated net worth is around $160,000. Moreover, Gray is also a model who has modeled for several fashion line and brands. She receives a good sum of money from the endorsements.