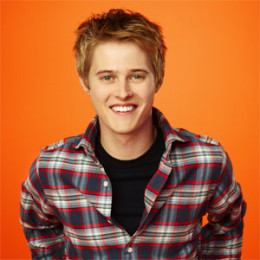 Lucas Grabeel is an American actor, singer-songwriter, and producer best known for playing Ryan Evans in the "High School Musical" series. Lucas is acclaimed for providing the voice of Deputy Peck in the Disney Junior TV series "Sheriff Callies Wild West" as well. The 35-year-old's character on the biopic movie sparked a rumor regarding his gender.

Switched at a Birth star, Lucas Grabeel is possibly single as of now. He is not seen or heard of being in a dating relationship with ladies. Probably, the 5 ft 6 in tall actor is busy focusing on his career or waiting for the true love of his life.

Lucas Grabeel has been in a number of romantic relationships in his life. He the singer-songwriter was romantically linked to Hannah Heart in 2002 and Pamela Saunders. Later then, he dated Sara Paxton, Nico Tortorella's rumored girlfriend. Grabeel and Paxton kindled the affair in 2006 but broke up in 2009.

He has had an encounter with Brittany Snow in 2008. It was rumored that Lucas and his longtime girlfriend Emily Morris got engaged on New Year’s Eve of 2014 but it is not yet confirmed. It was also reported that he was seen buying an engagement ring for his girlfriend.

Is Lucas Grabeel Gay in Real Life too?

Grabeel, the 35-year-old actor is not gay in real life though he stars such character in reel life. Lucas appeared in the 2008 biopic movie, Milk which is about a slain gay rights activist Harvey Milk. Grabeel, in the film he played a character of Milk, photographer Danny Nicoletta.

How Much Is Lucas Grabeel's Net Worth?

Lucas Grabeel possesses an estimated net worth of $800 thousand in late 2019. His primary source of income is a career as an actor, singer, songwriter, and film producer. He receives a salary of $25-$50.88 per hour.

Speaking of lifestyle, He currently resides in Mill Valley, California, Missouri, the U.S. The hazel-eyed owns a lavish two-story house in North Hollywood, California which is worth $1 million. Similarly,  he has two trucks manufactured by the Honda company.

Lucas Stephen Grabeel was born on 23 November 1984 in Springfield, Missouri, U.S. He is a proud son of Stephen Grabeel and Jean Harman. The actor attended Loga-Rogersville School prior to graduating from Kickapoo High School.

As a teenager, he played drums for a local church. Grabeel learned the styles of ballet, jazz, hip-hop, and tap. Lucas sang in a number of choirs and attended the Missouri Fine Arts Academy at Missouri State University.