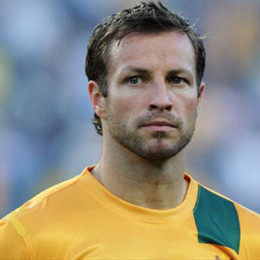 Lucas Neill is an Australian professional footballer who last played for the English club side Watford. He has just announced his retirement from the Australian National Football Team after 2014 FIFA World Cup. He used to play as a defender and also as center back as well as full back. He is very good at tackling the ball. He started his youth career at Manly United in 1991 later moving to AIS. He made his professional debut in 1995 from the club Millwall.

He is a married man. He is married to his longtime girlfriend Lindsey Morris whom he loves very much.

He loves to spend his time with his wife. He has not been pulled in any women related rumors or scandals. He loves his privacy and keeps his personal life out of professional. He is rumored during the transfer season on his transfer.

He was declared bankrupt in the U.K. on 2 May 2016. He is estimated to make $40 million during his career that included his property in the US and business in Sydney.

'Mr. Neill is due to be interviewed when he returns to the UK in the coming weeks, at which point the trustees will be able to obtain the background information required to determine the full scale of Mr. Neill's debts.'

'At this early stage of proceedings, it is currently unclear to what extent any funds will be recovered.'

As per a report from the Sydney Morning Herald, he was heavily involved in the original bid for a western Sydney- A-League club with his business partner and former manager Paddy Dominguez which eventually fell through.

Lucas Edward Neill was born on 9 March 1978 in Sydney, Australia.

No information is available on her. She is supposed to be his long time girlfriend and from his home town. He loves her very much. There is no any information if they have children as well . He has maintained privacy on his personal life.