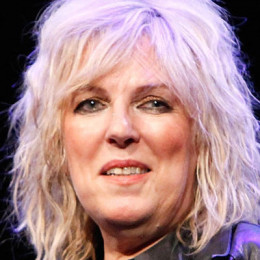 Lucinda Williams is a very talented and experienced American rock, folk, blues, and country music singer and songwriter who has been active in the music industry since 1978. She released her first album in 1978. She is known for working slowly. She was raised by her father, who was a poet and literature professor, after her father got the custody over her and her two younger siblings after her parents got divorced. She never graduated from high school as she was passionate about music since her young age.

Lucinda Williams married her longtime boyfriend, Tom Overby, an executive from Best Buy's music department since September 2009. The marriage ceremony was performed on stage by her father.

We love this photo too much not to #Repost @travisfnstephens #lucindamgmt  If you can’t be with your #valentine on #valentinesday ...staying up til the wee hours with @lucinda_williams singing @radiohead songs together HAS to come in a real close 2nd. This chick is always on  and continues to amaze me. See y’all on the road in March and April! #lucindawilliams #radiohead #songwriter #singersongwriter #music

Lucinda Williams holds an estimated net worth of $15 million.

She released her self-titled album, Lucinda Williams in 1988. The song was later recorded by Mary Chaplin Carpenter which garnered her first Grammy Award for Best Country Song in 1994.

He is a former Universal Music Group/Fontana Distribution music executive. After dating for a while, they got engaged and followed by their marriage a year after. He is also her wife's manager. They are living happily. They have no children till date.