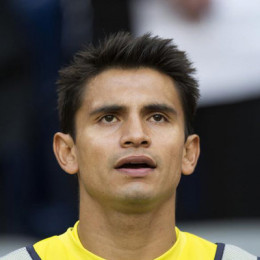 Attacking midfielder, Luis Saritama is an Ecuadorian footballer who has played in every Ecuador Youth national team, making an impact as having a notable pass speed, accuracy, response, and stamina.

Luis Saritama was born as Luis Fernando Saritama Padilla on October 20, 1983, in Loja, Ecuador. He is an Ecuadorian by nationality belonging to the White ethnicity.

Luis made his first international debut against Peru in 2003. He was re-appointed into the Ecuador National team for the 2006 FIFA World Cup in Germany and appeared in the same year against Brazil in Sweden, Mexico in Oakland and U.S in Tampa Bay.

Luis Saritama has played 48 matches for the Ecuador nation with no goals so far. His club career began with Deportivo Quito in 2001 for which he played until 2004. Saritama made 103 total appearances with 13 goals in this duration.

He next appeared in the Peruvian first division, where he performed with fellow Ecuadorian footballer, Johnny Baldeon for Alianza Lima. Both their contributions led to the Alianza’s run all the way to the finals, and the club won the Clausura champions in 2005.

Saritama then returned to Deportivo Quito in 2005 and made a total of 53 appearances with 12 goals. He was just 22 but was made the captain of the team and was used very regularly in the first team for the national matches. It was evident that Ecuador coach Luis Fernando Suarez intended on bringing him to Germany.

Saritama returned to Alianza Lima in 2007 and waited for the year with 20 performances and five goals.

In 2008, he captained Quito into gaining their third title in a series. After the 2006 FIFA World Cup, Saritama was approved by Tigres UANL.

On January 2013, Saritama signed a three-year contract with LDU Quito and debuted officially in a Copa Libertadores playoff match against Gremio which his team won. He played 11 league games, with a total of one goal.

Luis even though is in the spotlight most of the time, he has kept his private life hidden very successfully. No rumors about his potential girlfriend or affairs have come to the surface. And isn't planning to tie the knot anytime soon.

His current net worth is around 1.10 million Euros, indicates that the skill he has portrayed and the contribution he has made to the football fraternity in his 13 years career has proven worth it. He just signed a 1 million transfer deal with one of the most famous clubs in Europe Barcelona.