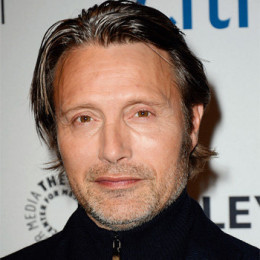 Mads Dittmann Mikkelsen is a actor, gymnast and dancer, best known for his role as Tonny the drug dealer in the first two films of the Pusher film trilogy and as Allan Fischer in Peter Thorsboe's Danish TV series Rejseholdet (Unit One). He began his career in 1996 making debut in the film Pusher. He played the lead role in the Oscar-nominated Danish drama, After the Wedding. He was born to Bente Christiansen, a nurse and Henning Mikkelsen, a bank teller and trade union official.

He is a happily married man, who married his long time dated girlfriend. His wife is a choreographer with whom he started dating in 1987 and got married 2000. As the couple seem totally satisfied and happy with each other's presence there is no point on talking about their divorce. From their marriage they have raised two children; a son and a daughter. We can follow him on Twitter @theofficialmads to stay connected to him.

Mads Mikkelsen was born on November 22, 1965 in Copenhagen, Denmark to Bente Christiansen, a nurse, and Henning Mikkelsen, a bank teller and trade union official. He was raised along with his elder brother, Lars Mikkelsen who is also an actor in Norrebro.

Mads Mikkelsen made his film debut in 1996 with Jens Arentzen directorial movie, Blomsterfangen. The same year, he appeared in another movie, Pusher

She is the one and only beloved wife of Mikkelsen, whom he started dating in 1987. She is a choreographer by profession.

She is the only daughter born to Mikkelsen and his wife.

He is the youngest member in the family and the only son of Mikkelsen.