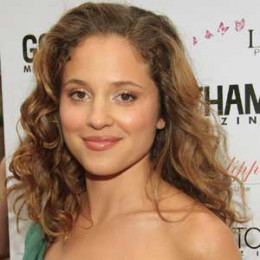 The young and talented lady, Margarita Levieva is a Russian-American actress. She is famous for the films like- The invisible, Adventureland and Spread and TV shows like- Revenge, The Blacklist. It is not confirmed that Margarita is single or not. After her break up with Sebastian Stan, she was caught with Joshua Jackson walking at night sharing smile. So, her relationship status might be single as well as might not be.She was also a gymnastic. Margarita is beautiful with makeup but is even pretty without makeup.

Margarita Levieva was born on 9th February 1980 in Saint Petersburg, Russia from a Russian Jewish family. At the age of 3, she began the training of a competitive rhythmic gymnast.  She took the training for 13 years and competed in the United States after moving to New York with her mother including two twin brothers when she was 11. She holds the citizenship of United States.

The gorgeous Margarita finished her high school from Secaucus, New Jersey. Later on, she got a bachelor's degree in economics from NYU and worked as a fashion buyer. She had a keen interest in acting and was accepted into the Meisner Training Program at the William Esper Studio.

From 2005, she started her career in acting and made a guest appearance on Law and Order: Trial by Jury. In the same year, she was nominated in top 50 beautiful people in New York by New York Magazine. Levieva's career jumped from the series, Vanished (starred movie) in 2006. Her featuring film credit includes- The Invisible, Noise, The Stand-Up, Knights Of Badassdom.

In 2009, Margarita worked in a comedy movie, Adventureland that earned $17.1 million at the box office. Then she also played in HBO comedy series How to Make it in America. Moreover, in 2011 she worked in the thriller movie The Lincoln Lawyer with Matthew McConaughey. Levieva also acted on the drama series Revenge on the ABC from 2011-2013. This series was nominated for the 2012 People's Choice award. Her acting got her to cast for the second season of Luck.

Levieva was born in Russia, but now she is the citizen of United States. She is still unmarried. But there are rumors about her dating. In 2007 she hooked up with Justin Chatwin, a Canadian actor.

Later on, in 2015 she was again in relation with a Romanian- American actor, Sebastian Stan and broke up after a year in 2016.

As per the sources, Margarita was recently caught with Joshua Jackson on 27th September, Tuesday in New York sharing laughs and walking at night. Both of them are single. And it is not sure that they are dating or not. Till 2017 she is not married so she can be called single for sure.

The incredible actress, Margarita has an estimated net-worth of $3 million. Her source of income is the films and the TV series.