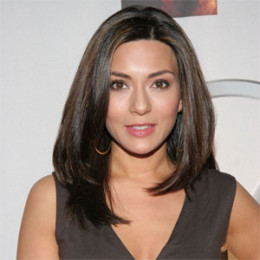 Marisol Nichols is a well known American actress. She is best known for her outstanding role in Fox Television Series "24", as a special Agent, "Naida Yassir". She's been active in the acting industry since 1996 and she's performed in many on-screen big projects such as "Scream 2", "The Sex Monster" and others. Recently, she starred in the series "Teen Wolf" as The Desert Wolf and also in "Riverdale" as Hermione Lodge. Except this, she has also appeared in the movie The Princess and the Marine, for which she got nominated for ALMA Awards for Outstanding Actress in 2002.

Marisol Nichols is happily married to the famous director/cinematographer Taron Lexton since 2008 and the couple is blessed with one daughter, Rain India Lexton. The happy family resides together in the Los Angeles, California.

Marisol Nichols was born on November 2, 1973, in the city of Chicago, Illinois, the United States to her father of Hungarian and Romanian ethnicity and Texan mother, Maria. At one point, Marisol proclaimed that she has never met her father.

Marisol is the eldest child of her family; she has two younger brothers. She was raised in Naperville, Illinois. She was rebellious when she was a teenager. She finished her primary education from Naperville North High School and graduated from the College of DuPage.

Marisol began her acting career in 1996 when she appeared in the episodes of Beverly Hills, 90210 and Due South. After one year in 1997, Marisol's career took a major turn when she made her first movie debut with American actor and comedian Chevy Chase, in the movie Vegas Vacation.

Following this, she was cast in the true story based American Marine movie The Princess and the Marine between the years 2000 and 2002, portraying the role of Bahraini Princess, Sheika Meriam Al Khalifa for which she was nominated for the ALMA Awards for Outstanding Actress and won the Golden Eagle Award for Most Promising Actress.

Marisol had also performed as the supporting roles in many movies such as Friends' Til the End, Jane Austen's Mafia, Can Hardly wait and others. Up to now, she has performed in many other movies and in television series.

The veteran actress is busy doing the American teen drama TV series Riverdale at present through which she is gaining huge popularity.

Marisol Nichols is living a luxurious life and from her acting career, she's amassed impressive net worth. She has her own luxurious house and car, and her approximate net worth is $2 million.

Marisol Nichols has worked in many hit movies which made a significant collection at the box office. Some of the hit movies and their box office collections are:

From her TV series Riverdale, she earns less than $100K per episode.

Marisol Nichols is a happily married woman who tied knots with famous cinematographer/director, Taron Lexton in 2004 after dating for four years. They even share a daughter together, Rain India Lexton after four years of wedding bliss on 30 September 2008.

Prior this Nichols was in a relationship with Italian Comic Book artist, Andrea Sorrentino back in 1995. The couple, however, failed to commit and eventually they broke up.

Nichols is also an active member of Church of Scientology. Also, she is the Ambassador of non-profit founded organization Operation Underground Railroad that operates to end human trafficking. The actress has raised awareness of human trafficking via two big celebrity events and she will continue to do so in the future as well.