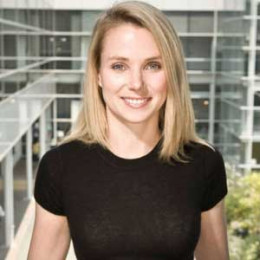 Marissa Mayer is an American IT executive and is currently working as a president and CEO of Yahoo. She formerly worked for Google as a Vice President of Local, Maps and Location Services and responsible for the product development. She is widely recognized as the most prominent businesswomen and a computer scientist and a high-paid female entrepreneur of the world.

Marissa Mayer (Marissa Ann Mayer) born on May 30, 1975, in Wausau, Wisconsin, United States was raised along with her younger brother Mason Mayer by her father Michael Mayer, an environmental engineer and mother Margaret Mayer, an art teacher. She holds American nationality and belongs to white ethnicity.

During her childhood, she was shy. In her high school days, she took piano and dance lesson. Since an early age, she was outstanding in both math and science and her dream was to study at Stanford University. In 1993 she graduated from Wausau West High School.

Mayer then enrolled at Stanford University and earned a Bachelor of Science Degree in Symbolic Systems and Masters of Science in Computer Science, fulfilling her childhood dream. She specialized in artificial intelligence at the University.

After completing her education, Marissa started her career at Google, and her contribution turned Google from a small start-up company to a global superpower and the No.1 internet company in the world today.

In the company, Mayer worked as a designer, product manager, engineer. Her career was fully stable when she joined $30-billion multinational tech company, Yahoo as a CEO and President.

She faced tough challenges to maintain the moral confidence and profitability of the enterprise. Later, Marissa became the member of the non-profit board for Cooper-Hewitt New York City Ballet, San Francisco Museum of Modern Art, SanFrancisco Ballet and National Design Museum.

In 2013, Marissa was also ranked as the 50 most powerful women in business and recognized as a younger woman to be listed by Forbes. In the same year, she eventually made history by being the only person to be featured in all three annual lists of Fortune magazine.

In her career, she won several awards such as Young Global Leader by the World Economic Forum, Matrix Award by the New York Women in Communications, "Woman of the Year" by Glamour magazine.

Famous Chief Executive, Marissa Mayer is in a love affair with the current CEO of Google Larry Page. The lovebirds dated for three years and separated.

Marissa then met lawyer and investor Zachary Bogue and began seeing him in January 2008. After one year the pair, Marissa and Zachary married on September 30, 2012. She gave birth to the adorable baby boy named Macallister Bogue.

After a few years on December 10, 2015, the beautiful couple was blessed with two identical twin girls, Marielle Bogue, and Sylvana Bogue.

The couple shares a strong bond and has shown no sign of getting a divorce. Currently, they happily reside on 38th-floor penthouse suite at the Four Seasons Hotel in San Francisco with their three children.

Marissa owns a $5 million dollar luxury penthouse at the Four Seasons hotel in San Francisco and also has a Palo Alto Craftsman home. Her current estimated net worth is around $430 million.

After her breakup with her ex-boyfriend, she married the Ceo of Google, Larry Page on December 12, 2009. Since then they have been a happy couple and share a great bond.

Marissa Mayer and Zachary Bogue have a son named Macallister Bogue. He was born on September 30, 2012.