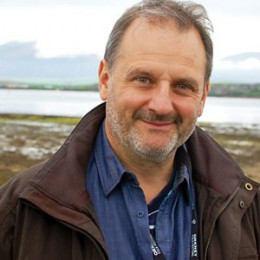 Three times Sony Radio Academy Awards winner, Mark Radcliffe is a British broadcaster famous for hosting various shows on BBC Network. He is also a musician and writer. He was awarded an honorary doctorate of Letters from the University of Bolton in July 2011.

Mark Radcliffe was born on 29th June 1958 in the city of Bolton, Lancashire, England. He attended Balton School and the University of Manchester earning a degree in English and American studies and classical civilization.

From childhood, he was interested in music and used to play the drums for numerous bands while he was in school and university. He also made music as a part of his life.

Mark started his career as a musician. He was a part of different bands including Skrewdriver (a rock band formed by Ian Stuart Donaldson in Poulton-le-Fylde, England). Later, he left the band and start hosting a Friday night show, Cures For Insomnia, at Piccadilly Radio in late 1982. He then hosted the show, Transmission, one of the broad show.

In 1990, he appeared as a DJ on BBC Radio 5’s Hit the north and Cult Radio. After working 20 years, in 2009, he stood as presenters on BBC Radio 5 live, to replace it, to cover Simon Mayo’s afternoon show.

Mark also started his radio 1 career in 1983, at Maida Vale Studio producing sessions for John Peel’s show. Though he worked for different shows, his work as a part of the act Mark and Lard on BBC Radio 2 was one of the popular show among the viewers which aired at 10pm-midnight slot on Monday to Thursday in 1993.

After leaving the Radio 1, he moved to an evening slot on BBC Radio 2 in March 2004 and BBC Radio 6 Music in July of the same year.

Mark has also presented a live music television program, The White Room, for four series on Channel 4 from 11th June 1994 to 23rd August 1996 and in BBC coverage of the Glastonbury Festival and the Cambridge Folk Festival.

Along with Marc Riley, he has presented a music based quiz program, Pop Upstairs Downstairs for the BBC/flex tech digital TV channel UK Play in 1999 and 2000. He was the winner of the singing competition Stars in Their Eyes.

Moreover, he has written an autobiography Showbusiness: The Diary of a Rock and Roll Nobody and a novel Northern Sky which was based around a folk music club in a Northern English city, published in 2005.

Mark married his long time girlfriend, Bella Sharpe on the 19th April 1997, in their home village of Great Budworth, Cheshire. The husband and wife are blessed with a daughter, Holly Radcliffe.  However, their marriage ended in a divorce.

Later, he married a journalist, reporter, and lecturer, Jenifer Radcliffe. From his second wife, he has two daughters: Mia and Rose. Mark is close to his family and believes that his family is the most important part of his life.

In July 2011, he was awarded an honorary doctorate of Letters from the University of Bolton. He is a supporter of Manchester City.

Mark is one of the successful English broadcasters. His source of income includes writing books, singing and hosting different radio and television shows. Looking at Mark’s lavish lifestyle, he probably has a net worth in seven figures.

Bella Sharpe is the first wife of Mark Radcliffe. Bella is a former TV producer and Stuart in Birmingham. They are parents of a daughter, Holly Radcliffe.

Jennifer Radcliffe is the current wife of Mark Radcliffe. Jennifer is also a journalist, reporter, and lecturer. The husband and wife are blessed with two daughters Mia and Rose.

Born in 1986, Holly Radcliffe is a daughter of Mark Radcliffe and Bella Sharp. Now, she is 31-years-old.

Born in Jan 1999, Mia Radcliffe, 18, is the first daughter from his second wife, Jennifer Radcliffe.

Born in 2002, Rose Radcliffe, 15, is the second daughter of Mark Radcliffe and Jennifer Radcliffe.