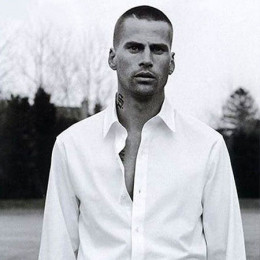 Dutch model, Mark Vanderloo ranked worlds no. 1 model in 1990 afterward, he started gaining name and fame. He is popular as the representative model of the Hugo Boss black-and-white prints ads and billboard. The green-blue-eyed model is also recognized as the male model of the videogame series Mass Effect.

Is Mark Vanderloo Married? Know about his past affairs and Marriage!

Mark Vanderloo is relishing blissfull married life with his spouse, former model Robine van der Meer. They shared the wedding vows on 3 June 2011 after dating for a couple of years on the island of Ibiza located in the Mediterranean Sea. The duo is together since then.

Mark Vanderloo and his wife Robin Van Der Meer at the Mango Fashion Show in Barcelona in 2015.
SOURCE: Zimbio

In addition, the couple is proud parents of two children. They first welcomed their daughter Emma Paula Vanderloo on February 6, 2004.

After a year, the duo was blessed with another child, a son Mark Vanderloo on 4 November 2005. As a matter of fact, they gave birth to their children and raised them mutually even before marrying.

The "America's Next Top Model" guest and his partner, Robine are united as life partners for eight years. The supermodel ocassionally appears together with his beloved but it doesn't mean they have parted ways. The cupid lives blissfully in their hometown Netherland with no rumors of extramarital affairs and divorce.

Vanderloo was previously married to the Spanish model Esther Canadas. The pair married on 12 June 1999 and stayed together for more than one year. Initially, they were sharing a good bond but after a year they started having conflicts and, eventually, the couple separated in November of 2000.

You May Like: Galina Becker's Personal Life & Past Affairs

The Dutch model and her present wife seem to have a good bond and there is no sign of divorce between them. Furthermore, Mark is currently out of rumors regarding his affairs.

What is the net worth of the famous Dutch model Mark Vanderloo?

Mark Vanderloo holds an estimated net worth of $6 million. There is no wonder that he owns that figured net worth as he is believed to have a salary of $48,000 per modeling champion.

Popular Model Mark Vanderloo in his one of the photoshoots.

Vanderloo worked in many famous campaigns in his career and he is the major model for the Hugo Boss black-and-white print ads and billboards since 2005. Further, he also worked with many world-spread brands like Calvin Kelvin, Valentino, Armani and many more.

You May Also See: Ranae Shrider's Net Worth & Married Life

The famous model is also signed to Wilhelmina Models in New York. He was also featured as the model of Commander Shepard in Mass Effect video for the game series of Xbox 360, PC and Play Station. The 6-feet-2-inch actor also made a guest appearance on America's Next Top Model on Cycle 11 in 2008.

Mark Vanderloo was born on 24 April 1968 in Waddinxveen, the Netherlands with Taurus zodiac sign. The green-blue eyed model became the number one model in the world at the age of 22 in 1990. Furthermore, he studied at the University of Amsterdam to study history.

The iconic model also grabbed the number 4th position under Top Icons Men on models.com. Moreover, after catching the limelight his character and his fellow model Jhonny Zander's character was even featured as the Derek Zoolander on the film Zoolander.

Check out the video of Mark Vanderloo when he was at the peak of his career in the early '90s!

Mark Vanderloo was first married to the Spanish model Esther Canadas. The pair married on 12 June 1999 and stayed together for more than one year.

Mark Vanderloo is married to the former model Robine van der Meer. The couple is in a marital relationship from more than 7 years.

Mark and Robine are the proud parents of their daughter Emma Paula Vanderloo who was born on 6 February 2004.

Mark and Robine are the proud parents of their one son Mark Vanderloo who was born 4 November 2005 respectively.